Your go-to source for performance boating.
HomeEvent CoverageMTI Owners Turn Up the Fun in the Florida Keys

MTI Owners Turn Up the Fun in the Florida Keys

MTI Owners Turn Up the Fun in the Florida Keys

With more than 20 boats in attendance from the famed catamaran and V-bottom builder in Wentzville, Mo., the Marine Technology Inc. Fun Run from Miami to Marathon, Fla., (and beyond) showcased a little bit of everything that MTI has to offer. 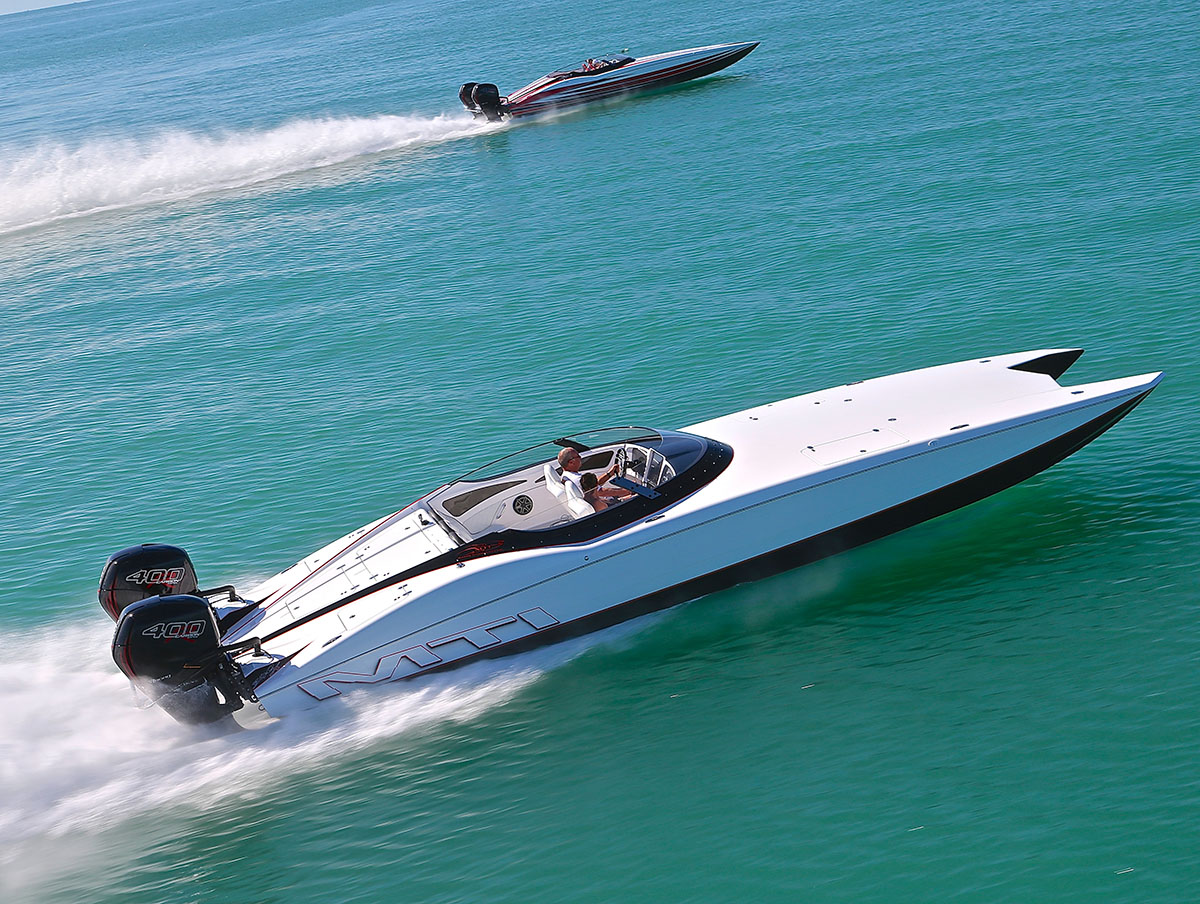 The fun run began in Miami on Thursday and headed southwest to Marathon’s Faro Blanco Resort & Yacht Club, the host location for the MTI crew as well as the Florida Powerboat Club’s Miami Boat Show Poker run, which took place at the same time. On Friday the MTI fleet headed to Island Grill in Islamorada for lunch followed by a dinner gathering back at the Faro Blanco that evening.

On Saturday, the group ventured to Key West some 45 to 60 miles away depending on if the boats took the outside or inside legs to the popular destination. Beyond that the owners, which didn’t pay an event fee and handled all of their own food and lodging according to their own tastes, were on their own to have a good time and explore the Florida Keys.

While he spent most of his time with Gargiulo, his longtime friend and customer, in the breathtaking 52-foot cat powered by twin Mercury Racing 1550/1350 engines, Xtreme Powerboats owner Larry Goldman had a great time assisting various customers on both the MTI fun run and the FPC poker run.

“I went back and forth between the events and it worked out great,” Goldman said, adding that Gargiulo participated in both runs and displayed the 52-footer, which earned the FPC event’s best catamaran award, at the MTI docks one day and the FPC docks the next day. “We had a great group of customers down there and our crew was offering full support up and down the keys the entire time.

“Gino’s boat ran phenomenal all weekend—we tore around every day and it didn’t miss a beat,” he added. “The only thing we had to deal with was cleaning out the sea strainers. But when you’re running around everywhere between 125 to 165 mph that’s going to happen. Tim Gallagher and the team at MTI organized a great event and took good care of everyone—I think this is only the beginning for the MTI fun run. Other customers are going to hear about how much fun it is and they’ll want to be a part of the next one.”

During the idle into Haulover Marine Center—the home of Xtreme Powerboats—on Sunday morning, Gargiulo commented that it was nice to see so many cool MTIs in one place.

“There were a lot of beautiful new boats on the run this year,” Gargiulo said, adding that his second Lamborghini-inspired cat is easily the nicest, best-performing boat he’s ever owned. “We had such a good time the past few days—I can’t wait to do it again.”

Check out a dozen more images from the MTI Owners Fun Run in the slideshow above.

One MTI owner that’s sure to come back next year is Oklahoma’s Jake Nossaman. The owner of Wired Up, a 48-foot catamaran with twin Mercury Racing 1350 engines, Nossaman said the MTI run was the most fun, laid-back event he’s ever done on the water.

“We had a great time—the boat was on rails the whole time,” Nossaman said. “Everyone was so cool and the weather was amazing. I can’t wait to do it again.”

Shoot 2 Thrill Pix’s Pete Boden—speedonthewater.com’s chief photographer—got up in the air to capture some awesome images of the various stunning MTIs that participated in the lunch run to Key West on Saturday.

The fleet of MTI models charging toward Key West on a calm day provided a beautiful sight (click image to enlarge).

Gallagher, the main man behind MTI’s sales and marketing, said the fun run was a huge success and that the variety of boats that participated was remarkable.

“We had a little bit of everything on hand,” Gallagher said. “Brett Baur brought his 44-foot catamaran Panty Dropper, which looks like a lot like our first 34-foot cat, so that was pretty cool. We had representation from all across the country. There were people from Utah (Baur), New Jersey, New York, Massachusetts, Texas and, of course, Missouri and Florida. The Faro Blanco staff was very helpful and was a major reason why everyone had so much fun. We had a nice buffet dinner on Friday night and on Saturday Joe and Jessica Marin of Luminetic Media put together a cool video presentation from the fun run that everyone enjoyed. Ken Lalonde’s son also put together a nice video for the group.”

Meet the Speedonthewater.com Team at Many 2017 Events