This year alone, Marine Technology Inc. (MTI) debuted two new catamarans, a 38-footer and a 52-footer. Yet those stellar models weren’t even the most anticipated ones from the Wentzville, Mo., builder. The company’s new 42-foot center console—MTI’s first V-bottom—has received plenty of attention since the innovative prototype was unveiled last summer. It’s definitely a V-bottom, but the lines on the new V42 resemble the catamarans that have made MTI legendary. All photos courtesy MTI

Well the wait is over. MTI delivered its first production V42 last week in Miami, and the crew at Xtreme Powerboats—MTI’s Florida dealership—was excited to hand the custom boat over to its new owner, who plans to take it on a trip to the Florida Keys in the next couple of weeks.

“We’re extremely excited to have the boat finished and the owner is very happy with it,” said Tim Gallagher, MTI’s sales and marketing director. “Everyone in the factory is thrilled with how it turned out. They’ve been working real hard on the boat for a few years now so it’s exciting to see the finished product come together.

“We had a couple of loose ends to tie up last week, but the boat came out just like we wanted it to,” Gallagher added. “I feel like we missed an opportunity by not having the boat at the Miami International Boat Show, but the reality is that it wasn’t quite ready and we’re not going to put something out that isn’t up to MTI standards. This boat has a lot of cool features that make it different and we wanted to make sure everything was just right.”

Gallagher isn’t exaggerating when he says the boat has a lot of cool features. From new Mercury products at the helm and the uniquely hinged cabin door to the spacious storage compartment below the side-by-side lounge seats ahead of the console and the innovative tilt-out storage lockers in the gunwales, the 42V has a definite wow factor to it. The impressive Rigid Industries LED lighting definitely helps.

At the helm, MTI installed Mercury’s all-new VesselView system, which, according to Gallagher, is more user-friendly than the previous version thanks to additional customization options. The V42 also includes Mercury’s new Theft Deterrent System (TDS), marking the first time the attractive automotive-type two-piece fob has been installed in a consumer boat. 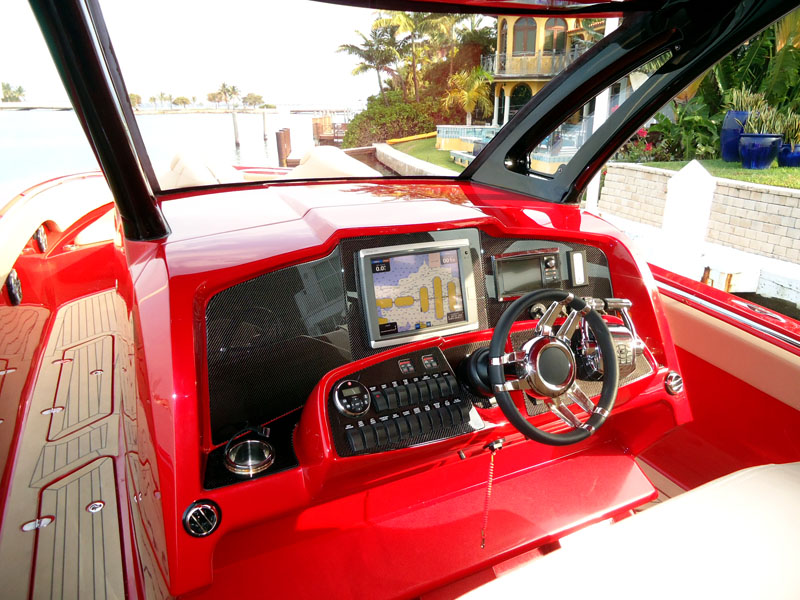 Centered in the dash at the helm of the 42-footer is a large Garmin GPS display with Mercury’s new VesselView system to the right.

While the prototype also included two rows of three bolster seats below the stylish T-top—by the way the spoiler on top doesn’t affect the boat’s performance, it’s just for looks—Gallagher said that MTI has alternative layout designs for the cockpit.

“We know the six-bolster style in the new boat may not be for everyone,” he said. “If someone doesn’t want the second row of seats, we have other options in mind. This first boat is fully equipped, that’s for sure. We’ve done some different things with the anchor design to make it almost completely flush with the hull.

“The cabin is for real, too—we’ve got a queen-size mattress in there and half of the bed flips up to create a lounge,” Gallagher continued. “It’s a very usable cabin with a diesel generator, air conditioning and all of the standard amenities.”

Ahead of the console, the spacious lounges open on a single hydraulic ram to reveal plenty of space for life jackets and other items. Hidden under the hatch is a sun pad that can be removed and mounted on an electric table that rises up and down between the bow’s wraparound seating. Additional storage can be found in the tilt-out gunwale lockers and in the boat’s deck, which is covered with Permateek.

The new V42 features an 11-foot, 6-inch beam and weighs approximately 15,000 pounds, although Gallagher said the next few models will be lightened up as the production process is more refined.

“The boat runs phenomenal,” Gallagher said after driving the 42-footer, which is powered by four Mercury 300 Verado engines, last week in the ocean. “The boat runs well in flat water, but offshore it’s incredibly efficient and dependable. It handles really well no matter what direction you’re running. It just feels so strong that it can run over anything.

“The bottom is a little different than your typical V-bottom,” he added, giving credit to the unique hull designed by MTI owner Randy Scism. “It has a little tunnel in it that picks up the back end, allowing it to be more efficient. Randy’s design sure paid off.”

Gallagher, who envisions the quad engines being the most popular power package, said the approximately $600,000 boat tops out at just over 70 mph and gets more than 1 mile per gallon while cruising at 40 mph. The second V42, which recently came out of the mold, has been ordered with four 300 Verados and the third will be powered by quad 350 Verados. Gallagher can’t wait to see how that one runs.