While the small V-bottom classes typically produce the most compelling action on the Offshore Powerboat Association circuit, a couple of big-catamaran teams are looking forward to mixing it up at the organization’s 2016 season-opener (May 20-22) in Point Pleasant Beach, N.J. Both the Miss GEICO and ALEX AND ANI teams have committed to competing in OPA’s Extreme class in the Point Pleasant Beach Grand Prix. 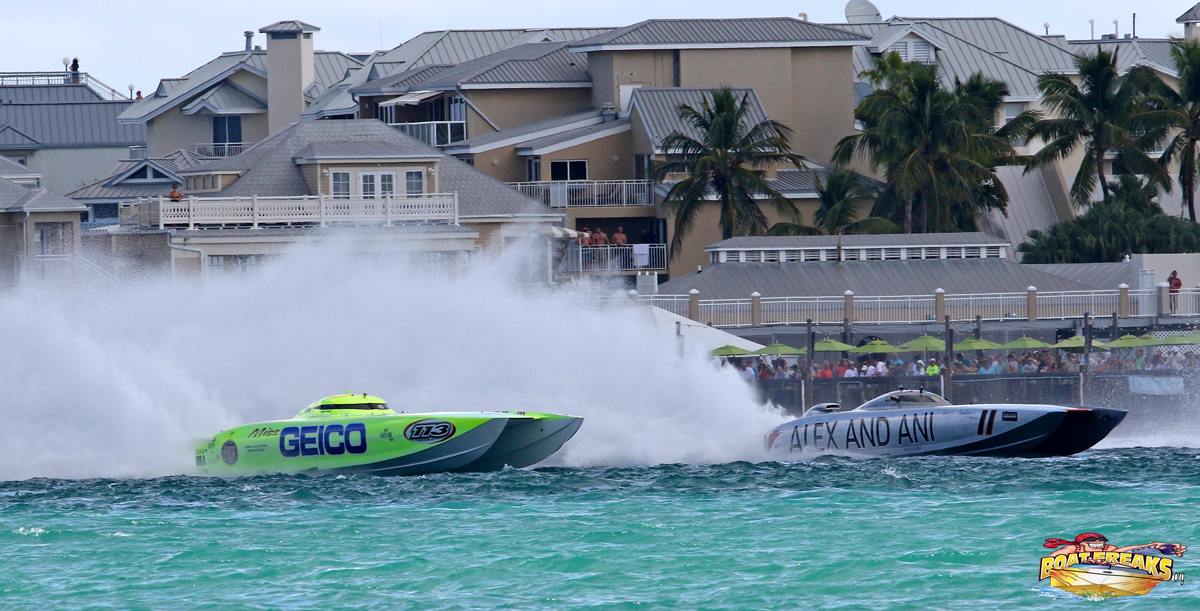 For the Miss GEICO and ALEX AND ANI teams, the OPA Point Pleasant Grand Prix presents the start of a comeback opportunity. Photo courtesy/copyright Jeff Helmkamp.

For New Jersey native Scott Begovich, the throttleman for the Miss GEICO team’s 44-foot Victory catamaran, the Point Pleasant Beach event represents a homecoming and a shot at redemption in front of legions of supportive fans. He’s more than ready to put 2015—the worst season in history for the team—behind him.

“I am looking forward to finishing races this year and shutting everybody up,” Begovich said. “You have one bad year and people think you’re done. We’re far from done.

ALEX AND ANI team owner and driver Jimmy Cazzani said he welcomes taking on the Miss GEICO team in a venue where he did well in years past. Like the Miss GEICO group, the ALEX AND ANI team is coming back from a short 2015 season of engine failures in its 42-foot Platinum catamaran. Cazzani and throttleman/engine builder Herb Stotler are hoping for a reversal of fortune in 2016, starting with the OPA season-opener.

“I am hell-bent on proving that the turbo power my brother, Bobby Cazzani, and Herb Stotler designed and built can run with the exotic powerplants Miss GEICO and CMS currently utilize,” Cazzani said. “I have a tremendous amount of respect for the entire GEICO team, but out there they are the enemy. I want to beat Scotty in his hometown. Most of these teams show up with a brigade—I’m like ‘five guys and a pen.’ But I do love them.

“I’d love to see Point Pleasant Beach as an annual event,” he added. “It is a storied race site, and a great place to visit that brings back fond memories. I’m from the Northeast, so New Jersey is like home for me.”

CMS Offshore Racing and Wake Effects Teaming Up for 2016