The last major high-performance powerboating event of 2013, the Super Boat International Key West Offshore World Championships and concurrent Florida Powerboat Club Key West Poker run, will come to life during the first week of November. While the offshore races on Wednesday, Friday and Sunday will most likely attract a 50-plus-boat fleet, the poker run should attract between 150 and 160 boats this year, as it has in years past. 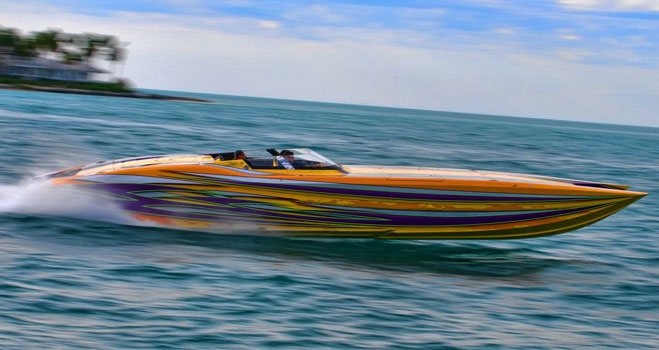 “We have about 75 registrations so far,” said Stu Jones, the owner and founder of the Florida Powerboat Club, via telephone during a break in a motorcycle rally to Key West earlier today. “We’re on track for our usual 150 to 160 boats.”

For offshore race fans, there are some solid storylines and battles that could develop during race week in Key West. Here are three:

In the single-engine Superboat V class: Outerlimits and Fountain likely will vie for first-place as each builder has a new—or one-year-old in the case of Outerlimits—raceboat. That’s not to say another team couldn’t win a race or even take the overall title—mechanical issues have been known to strike new boats as well as older ones—but right now those two 30-footers look to be favorites to vie for top honors.

In the Superboat class: Stihl and WHM Motorsports have been duking it out all year in this catamaran category, which was retooled just in the time for the Key West Worlds last year. On the heels of its recent win in Michigan City, Ind., the J.D. Byrider Skater cat certainly cannot be counted out of the running. Warpaint and Spirit of Qatar look to be long shots based on their regular-season performances to date, but Key West has been known to produce a few surprises.

In the Turbine class: This one is completely up for grabs, and here’s why: There’s has been no turbine-to-turbine catamaran racing this year. In a perfect world, Miss Mary Mac and the Qatar team’s new Al Adaa’am 96 would go head to head. But since they haven’t yet it’s tough to handicap. Steve Curtis is one of the best throttlemen alive, but the Qatar team’s new 50-foot Mystic cat has one race under its belt right now. The team of John throttleman John Arruda and driver Richard Chaney, Jr., in Miss Mary Mac, a 48-foot Marine Technology, Inc., model, definitely have more turbine-boat seat time than Curtis and driver Sheikh Hassan bin Jabor Al-Thani. It’s a coin toss. If the new Aqua-Mania MTI turbine cat is ready in time to make it to Key West (unconfirmed at this point) and does race, it could add a little spice to the mix. But right now—based on regular season attendance—the boat that shows up is the boat that will take the Turbine-class world title.

Also worth noting: In the Poker Run Village this year there will be two new exhibit additions, the new Mercury Racing mobile marketing vehicle, which was unveiled at the Lake of the Ozarks Shootout, and the Hardin Marine Mobile Display Showroom.