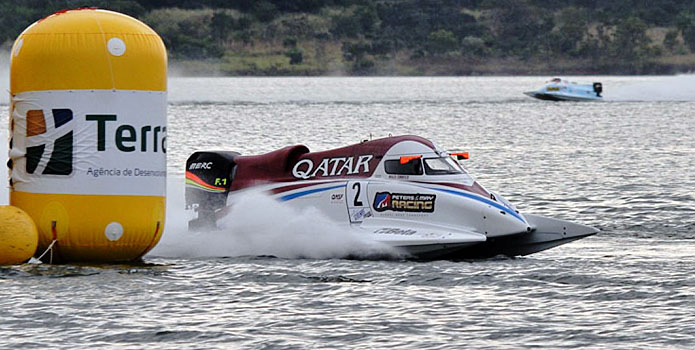 The upcoming 19th Grand Prix of China from the shores of Liuzhou will not only serve as the halfway point of the 2013 Union Internationale Motonautique (UIM) F1 H2O World Championship season, it also marks an impressive series milestone—the 250th Grand Prix—for the organization, which was started in 1981.

In the four decades since, the series has watched 32 different nations from five different continents host an event with a total of 189 drivers competing in the championship from 37 different countries of which 12 of these drivers were skillful enough to have earned the title “world champion.”

Go ahead, read it again—it took me a couple of times. There are even more numbers in the promotional story on the F1 H2O website. If you like this type of racing, you’ll enjoy this feature as it examines the greatest tunnel boat drivers and how the sport has evolved over the years.

The upcoming Grand Prix of China, the third round of the 2013 season, will be held on Oct. 1-2 alongside the Liu River in Liuzhou. After finishing second in the first two races in Brazil and Ukraine, American driver Shaun Torrente sits atop the points standings with his Qatar Team teammate Alex Carrella of Italy in fourth behind Mad Croc driver Sami Selio of Finland (second) and CTIC China driver Phillippe Chiappe of France (third).

All of the racing action from China can be followed live via streaming on the series website.