In February, Hollywood, Fla.-based custom center console builder Midnight Express began converting all its models from conventional lamination to resin infusion. When the transition of the company’s 37-footer is complete early next year, all of the builder’s models will be built exclusively using the process. 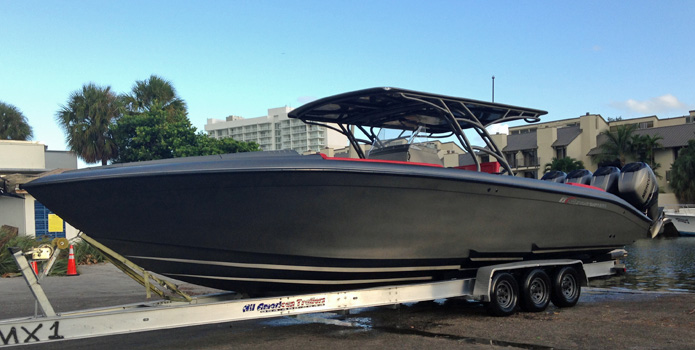 Unlike the process of vacuum bagging, the infusion process does not remove excess resin from fiberglass (or epoxy from carbon fiber) using a vacuum after both are placed in a bag to form a hull, deck or part. Instead, all of the dry materials go into the bag and then the resin is pumped into the bag through a series of hoses and vacuum-infused into those materials.

“When you infuse, you put in only the resin that the fiberglass will accept,” explained Eric Glaser, the owner of Midnight Express. “It’s an even lighter and stronger process than vacuum-bagging. The calculated weight of our 39S—that’s what we’re calling the 39 built with the infusion process—with triple 300 Verado outboards is 8,500 pounds. With quad 300 Verados, we are expecting it to run 85 to 90 mph, which will be a center console speed record.

“The structure of the 39S is not the only thing that has changed,” Glaser continued. “The entire hull has been redesigned going from non-stepped to stepped and we also have added the IRS system (see below).”

Converting to infusion-based lamination for all of the company’s center consoles—the builder offers 34-, 37-, 39- and 43-foot models with various deck configurations—has taken a year primarily because all of the hull and deck molds have to be modified for the process. When the transition is complete, Midnight Express will be the first high-performance center console manufacturer building all of its models with the infusion process.

An up-close look at the resin infusion process underway on the 43-footer.

John Cosker of Mystic Powerboats designed all hulls, which feature a proprietary Integrated Spray Reduction system, in the current Midnight Express line. For the builder’s 43-footer, Cosker also worked closely with Glaser on the deck design.

Glaser, who recently returned from exhibiting at the Fort Lauderdale International Boat Show said he hopes to produce 36 center consoles across his product line in 2014. “We’re a little more than halfway sold out for 2014,” he said.

Earlier this year, Glaser purchased tooling for 60- and 70-foot sport yachts designed by Cosker. “We’re not really focusing on that just yet, though I do have clients who are interested,” said Glaser. “We’ve just been so busy with (converting to) the infusion process. Once we get that finished, we will start focusing on building the yachts.”

Giving Thanks The Offshore Way