To put it mildly, it’s been a busy day for new high-performance powerboat and engine introductions at the 2012 Miami International Boat Show. The morning kicked off with the unveiling of the Mercury Racing 565 powerplant (Read the story). And that was just the beginning… 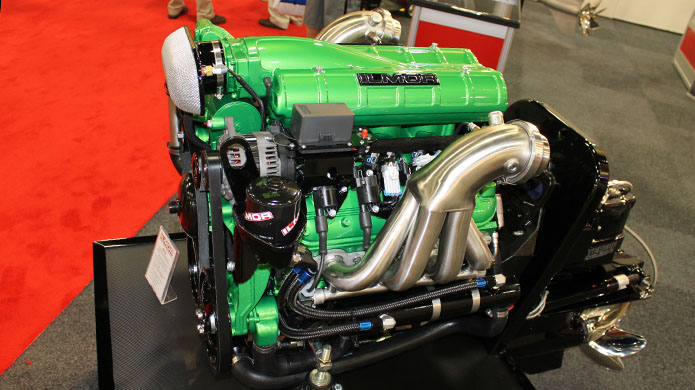 On the performance side of things from Ilmor High-Performance Marine, the company had its new MV8 570 engine on display. Hand-built to the same quality standards as its MV10 race engines, the new 570, which is based on Ilmor’s latest recreational engine, the 7.4L MV8, is more than 2 inches shorter and narrower than the company’s 8.2L big-block engines.

Featuring a dual-equal hydraulic phaser that adjusts cam timing for intake and exhaust valves, the 570-hp engine also is 87-octance compatible. Maximum rpm on the engine is 5,900 and its compression ratio is 10.7:1.

Outerlimits pulled the cover off its highly-anticipated 29-foot sportboat, the SV29, which was powered by a Mercury Racing HP600SCi engine.Mike Fiore, owner of Outerlimits Offshore Powerboats, pulled the sheet of his company’s new 29-footer with an 8-foot beam just after 11 a.m., and it’s a stunner. All three pieces of the quad-step boat—hull, monocoque liner structure and deck—are chemically bonded together and then “baked” in the Bristol, R.I., company’s autoclave. All three pieces are built with epoxy, carbon fiber and E-glass, and, of course they’re vacuum bagged and foam cored.

“There’s a lot of technology in this little boat,” said Fiore. “It took us a year to design. It’s our first single-engine boat, so we didn’t have existing designs to go from.”

Cool stuff interior stuff? High-back carbon fiber bucket seats for the driver and copilot and Alcantara, a slick version of simulated suede, upholstery throughout the interior and on the sun pad.

Statement Marine’s latest 42 Ultimate, Invitation Only, was high above the company’s Miami International Boat Show booth.Always an attention-getter since the company made its debut in 2008, Statement Marine didn’t disappoint this year as high above the bar in the center of its booth was its new 42 Ultimate V-bottom, dubbed Invitation Only. Still, it was the builder’s new 368 SUV Crossover that received a majority of the attention. Joining the company’s 34 and 37 SUV models, both of which were introduced in 2011, the new 37-foot-long, 10-foot-wide model was designed to be a true crossover-themed center console.

“Traditionally, center consoles were viewed as fishing boats,” explained Statement co-owner Todd Werner. “Then more recently, along came the sport/luxury center console. Both types of boat have their own merits. But the Statement SUVs are true crossovers, meaning they have been specifically designed to accommodate on-water activities across the entire spectrum, from fishing and diving to cruising and beyond, and they do so extremely well.”

The 368 SUV Crossover was decked out in luxurious trim. A teak cockpit sole and sculpted wraparound cockpit upholstery complemented the honey gelcoat and metallic blue painted hullsides. A cuddy model, the 37-footer featured a richly upholstered foredeck sunpad with an electric-actuated adjustable backrest.