Late last week Don Worth and the Friends of Miami Marine Stadium (FMMS) received great news relating to the historical preservation of Miami Marine Stadium. On March 29, the Miami Sports and Exhibition Authority approved some amendments to the Memorandum of Understanding (MOU) between it, the FMMS and the City of Miami to create a partnership to prepare plans for the restoration of the Marine Stadium. 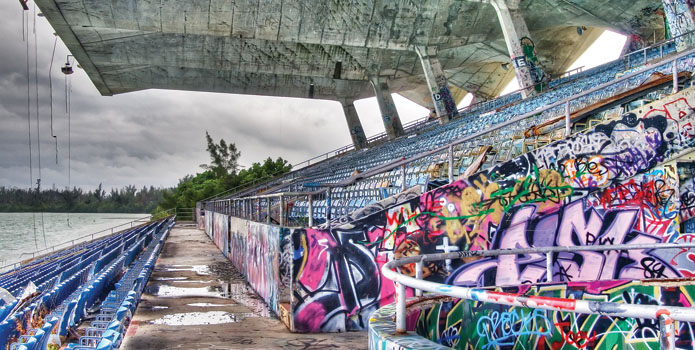 Since being shuttered by the city in 1992, Miami Marine Stadium has become a graffiti-covered monument.

With support from District Commissioner Marc Sarnoff and Commissioners Francis Suarez and Willy Gort, along with the enthusiastic leadership of Miami Mayor Tomas Regalado, the Miami City Commission approved the MOU earlier in March. The 6,566-seat stadium, which was built in 1963 by Cuban-American architect Hilario Candela, was closed in 1992 due to damage from Hurricane Andrew.

According to Worth, who cofounded FMMS more than four years ago with the mission of saving and restoring the graffiti-covered landmark, under the terms of the MOU, the group has just six months to develop a plan specifying the amount of land needed, as well as a financial and operating plan. The necessary funds for restoration of the stadium need to be collected within a two-year period (no city funds are to be used). Through various engineering reports, restoration costs are expected to be approximately $30 million—FMMS has reportedly raised more than $10 million in commitments so far.

Speedonthewater.com will stay on top of this story as the stadium, which has been pillaged by graffiti artists and hooligans for two decades, is sure to welcome back racing and become one of the most historical waterfront monuments in the country.

Photographer Tim Sharkey stopped by the dilapidated stadium during his trip to the Miami International Boat Show in February. Click here to check out his beautiful images.

And for more on the stadium and the preservation efforts, check out this informative story on SunPostWeekly.com.