We have good and bad news from the first day of the Miami International Boat Show. First, the bad—the show organizers are not anywhere close to solving their transportation problem. Getting to and from the show was at least as bad as it was last year. We are not mass transportation planners, but there has to be a better way to catch an Uber or Lyft than waiting in a long line for a shuttle bus, taking that shuttle in the opposite direction you’d like to, hopping off the shuttle and then hailing your ride service to get back to your hotel.

Getting to the show was simpler but no more efficient. The 3.6 miles between our digs at the Fortune House and Miami Marine Stadium, the show venue on Virginia Key, took almost an hour.

And the good news? Everything below. Here are five of our highlights from the show along with images by speedonthewater.com chief photographer Pete Boden of Shoot 2 Thrill Pix.

It Takes A Cigarette Village

With the 59-foot Tirranna, a hybrid between a plush custom sport yacht and a super console powered by six Mercury Racing Verado 400R outboard engines, Cigarette Racing Team unveiled its largest model to date. So it was only natural that the company would showcase the 59-footer in its own boathouse display. Visitors to the Cigarette docks who didn’t feel like climbing aboard Tirranna get could a virtual tour of the boat thanks a massive horizontal touch-screen display. And the entire boat-filled Cigarette display was designed to be “see through” from one end to another. 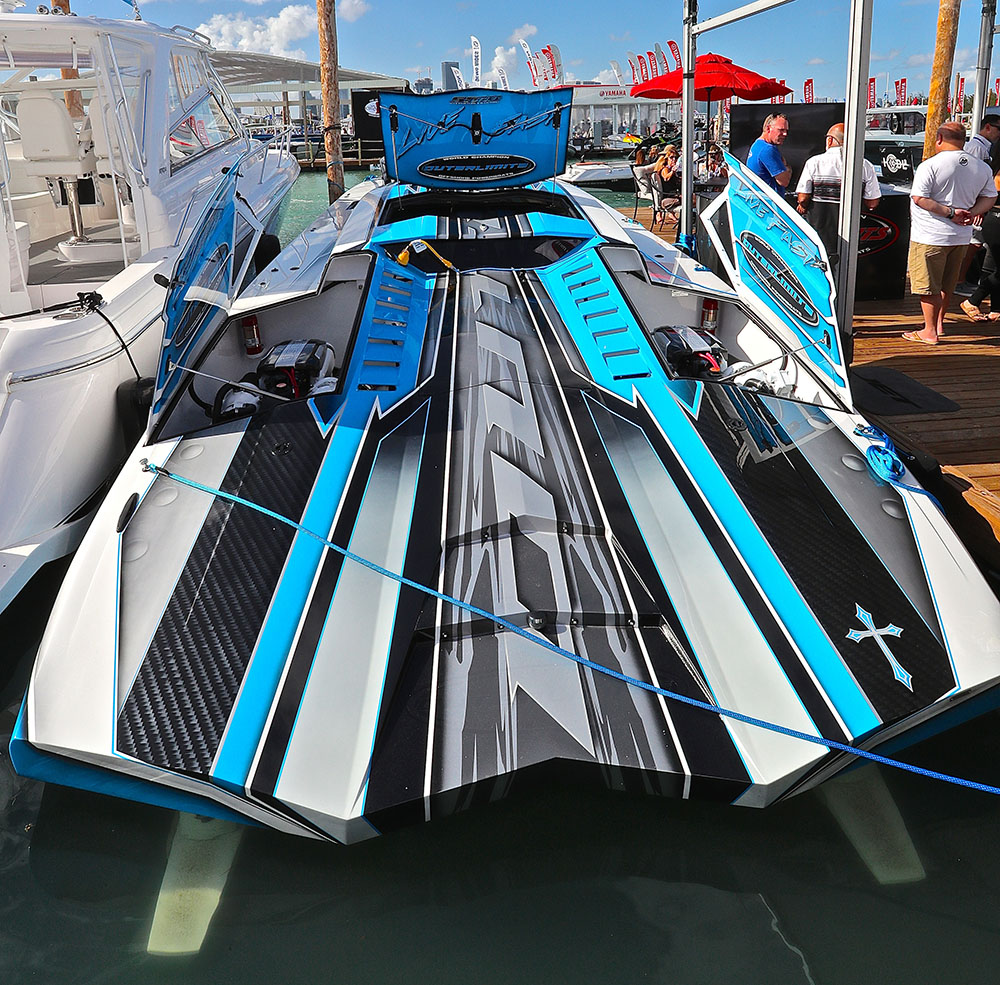 In general, we wouldn’t have all that much to say about a two-boat display. But in Crypto, an incredibly detailed canopied SV 43 V-bottom featuring a mural of late-Outerlimits Offshore Powerboats founder Mike Fiore on the underside of the canopy (see image in slideshow below), and JET, a stunning canopied SC 46 catamaran owned by Michigan performance boater Burton Kirsten (right, click to enlarge), Outerlimits displayed two of the most impressive creations of the entire show. Despite that the company’s virtual tour display on the docks between the two boats proved to be a little buggy, the first day of the Miami show signaled a spectacular rebirth of the company for sole owner Brian McLaughlin, sales manager Dan Kleitz, production manager Jason Amaral and the rest of the Outerlimits crew, which include Fiore’s father, Paul.

You couldn’t turn your head without spying an outboard engine-powered center console at the docks in Miami today—outboard-powered center consoles definitely are here to stay (just in case you thought they weren’t, which we know you didn’t). So the absence of outboards on the new Nor-Tech 56-foot center console caught our eyes, and was even a little refreshing. To power the beauty, Nor-Tech equipped it with a trio of 550-hp Cummins diesel inboard engines. 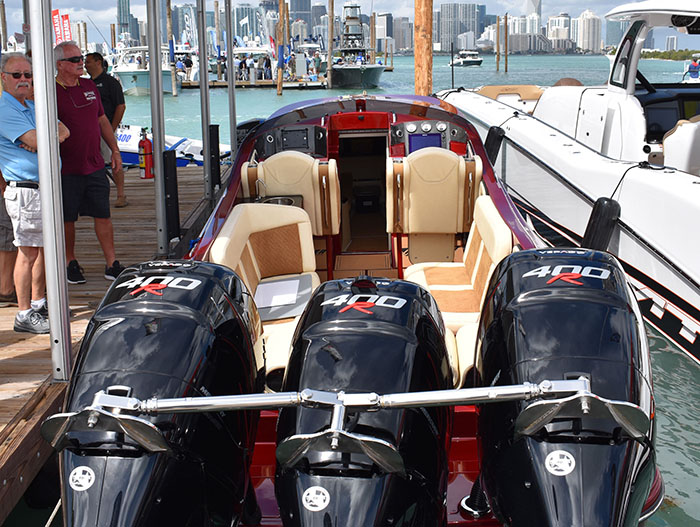 Replace stern-drives with outboards and you reclaim space that once belonged to engines. And that means—if you’re clever—you can maximize cockpit space and seating for your passengers. Joe LoGiudice and the crew at Hustler Powerboats did exactly that with the stunning 39 Shotgun sportboat (right, click to enlarge), which is powered by triple Mercury Racing Verado 400R engines. No slouch in the performance department, the 39-footer has run 95 mph with the engines turning 6,400 rpm and LoGiudice expects the boat to top 100 mph. Special show pricing had the 39 Shotgun in the mid $550,000 range, and while that’s not quite a steal, it’s a damn good price. (Don’t believe us? Check comparable prices for boats in the same class.)

An added bonus of the show—one that happens each year—is getting to see the people who make this industry go round. Whether that’s Cigarette’s Skip Braver (above, center), FB Marine Group’s Randy Sweers (above, left with speedonthewater.com’s Matt Trulio), MTI‘s Tim Gallagher, Performance Boat Center‘s Myrick Coil, Skater Powerboats’ Tony Cutsuries or boating friends such as Jason Moe, Greg Harris, Win Farnsworth or Bubba Chrisco, shaking hands and checking in with each one of them is one of the most enjoyable parts of the show.

Check out the slideshow above for even more of the coolest performance boats on display at the show today in Miami.

Nor-Tech Owners Fun Run Set For Lake Of The Ozarks