This morning, Mercury Racing debuted a concept automotive crate engine at the 50th annual Specialty Equipment Market Association (SEMA) show this week in Las Vegas. The 1,650-hp turbocharged engine is being showcased in a super car, according to a press release from the Fond du Lac, Wis., marine propulsion system company. 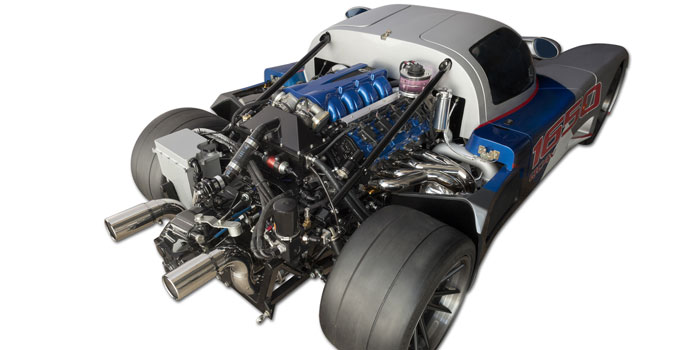 Unveiled at the SEMA show today, Mercury Racing’s quad overhead cam handiwork can be found in an exotic super car.

With an output of 1,350 hp, the first Mercury Racing quad-cam, four-valve (QC4v) engine was unveiled in 2010. The company used the same platform, which was designed and developed in-house, for its subsequent 1,100- and 1,650-hp engine offerings.

“We have been talking about the automotive crate engine project for a good year or so,” said Rick Mackie, the senior marketing manager for Mercury Racing. “It has very similar block specifications to the original QC4v platform, but the turbochargers are in a different spot and it comes without the (marine) exhaust routing.”

Also on exhibit at the SEMA show next to the QC4v 1650 crate engine-powered car is a Dave’s Custom Boats M41 Widebody catamaran powered by a pair of Mercury Racing 1350 engines. DCB company founder Dave Hemmingson is on hand with Mercury Racing representatives to help answer questions.

Flanked by complete Mercury Racing 1350 and 520 engines, a cutaway engine display shows the inner workings of the QC4v engine design. A QC4v crate engine also is featured in SEMA’s New Products Showcase. The 9.0L V-8 engine shares all of the attributes of its marine cousin.

According to the press release, the crate engine offers a multitude of configurations from basic long blocks to turnkey, ready-to-run power packages. Mercury Racing also is promoting a wide range of its traditional pushrod engines. These engines, based on a CNC-machined 8.2L (502-cubic-inch) cylinder block, could also serve a variety of markets outside of their typical marine applications.