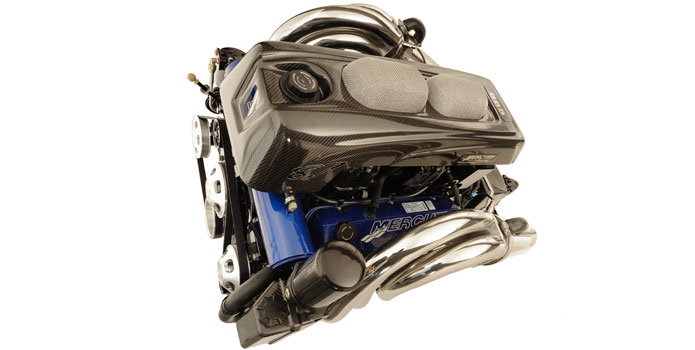 As you read this, members of the media and “Premier Day” attendees at the 2012 Miami International Boat Show are getting their first look at the new naturally aspirated 565 engine from Mercury Racing. Based off the same block as the Fond Du Lac, Wis., company’s popular 525 EFI engine but stroked to create an additional 31 cubic inches of displacement (533 cubic inches total), the new powerplant pumps out 565 hp and features digital throttle and shift, as well as Mercury Marine’s SmartCraft engine management and information system.

Key components of the closed-cooled engine, which runs on 89-octane fuel and complies with Environmental Protection Agency and California Air Resources Board emissions standards, include redesigned cylinder heads, multiport fuel injection and twin electronic throttle bodies, according to a press release from Mercury Racing.

Drive options for the 565 include the standard Bravo One XR and Bravo One XR Sport with 1.35:1 or 1.5:1 gear ratios. Mercury Racing’s Integrated Transom system also is available.

On the aesthetic side, the 565 comes standard with a carbon fiber top, a styling cue taken from the 1100 and 1350 engines, which also protects the engine’s electronics. The engine is available in 11 colors including standard “Raven” black and Mercury Racing metallic blue.

Asked how the 565 compares to the less-powerful 525 EFI and the more powerful 600SCi, Kiekhaefer said he not yet ridden in a powerboat equipped with the new engine.

“My engineers tell me it gets on plane a lot more quickly and easily than a 525 boat because the 565 has a much broader torque curve,” said Kiekhaefer. “As for how the 565 compares to the supercharged 600, the 600 will still kick its butt.”

The 565 comes with a one-year limited warranty for recreational boating. Price and production schedule have not been released.