Dubbed as the replacement for the HP525EFI engine—the longtime workhorse of the Mercury Racing engine line—the new 540 engine debuted moments ago during the Miami International Boat Show. The first pair of 540 engines was installed in the new Cigarette Racing 38′ Top Gun VIP Edition that was built for the Qatar Marine Sports Federation and made its public debut this morning in the Cigarette Racing Team exhibit (read the story). 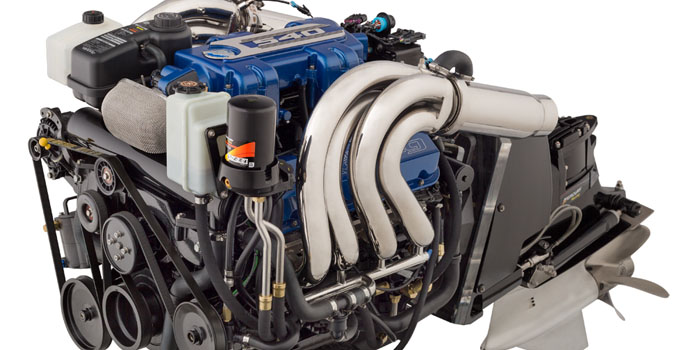 Thanks to larger cylinder bores, the naturally aspirated 8.6-liter engine has a 21-cubic-inch displacement advantage—523 cubic inches as opposed to 502 cubic inches—over the 525EFI model. This larger displacement produces 13 percent more planing torque and an additional 50 foot-pounds of peak torque, according to a press release from the Fond du Lac, Wis., high-performance marine engine company.

“The 540 enhances performance people have come to know from the 525 with consumer friendly features such as digital throttle and shift,” said Rick Mackie, the senior marketing manager for Mercury Racing. “It shares the same computer as the 565 and this outshines the 525 in fuel efficiency and range as well.”

The computer-controlled engine uses the same Propulsion Control Module (PCM 09) microprocessor as the 520 and 565 engines, as well as the 1,100-, 1,350- and 1,650-hp QC4v engines. In addition to the engine tuning, performance and operational benefits, the controller makes the 540 compatible with Mercury Racing’s new fully digital Zero Effort controls.

The 540 can be paired with the company’s new Bravo One XR Sport stern drive. The drive’s surface-piercing gear case is two inches shorter than a standard Bravo unit. For improved overall cooling, the new drive is equipped with dual water pickups mounted on the nose of the torpedo and strut.

Priced at $52,152 with the new shorter Bravo drive model, the 540 engine runs on 87-octane fuel and meets Environmental Protection Agency and California Air Resources Board emissions requirement. It is offered in 11 colors including standard “Mercury Racing Blue Metallic.”