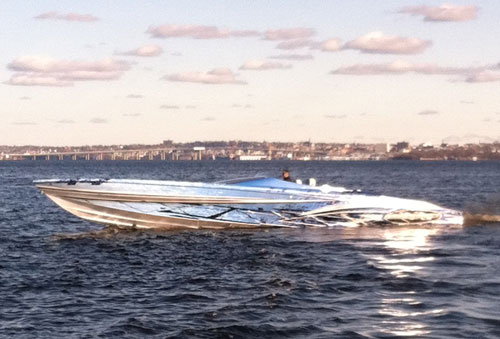 The last pair of new Mercury Racing 1075SCi engines off the Fond Du Lac, Wis., company’s line have apparently found a worthy home in a new Outerlimits 44 SL V-bottom. According to the boat’s owner, Dave Scotto of Toronto, Canada, the stepped-hull 44-footer, which at present has no cabin, reached 138 mph in testing last week.

“My eyes were glued to the GPS,” said Scotto, who braved 10-degree weather to take his new boat on its maiden voyage in Bristol, Rhode Island, the home of Outerlimits, with company principal Mike Fiore at the controls. “I watched it go from 115, 120, 125, 130, and before we knew it we were running 138.

“When we took it out in rough water, like 4- to 4-1/2-footers, the boat was like it was on rails,” Scotto added. “It was phenomenal. I had my mechanic with me—he’s worked on all five of my offshores and he races hydroplanes and has gone 200 mph—and he said, ‘I have never been in anything in my life that handles like this in all kinds of water conditions.’ I told Mike, (Fiore), ‘I’m so happy. God can take me now. I’m done. This is the first offshore I’ve had built just for me. I can’t believe it’s mine.”

“Actually, it hit 139 on the GPS and 140 on the Livorsi GPS speedo,” said Fiore. “We couldn’t be happier with the boat’s performance.” 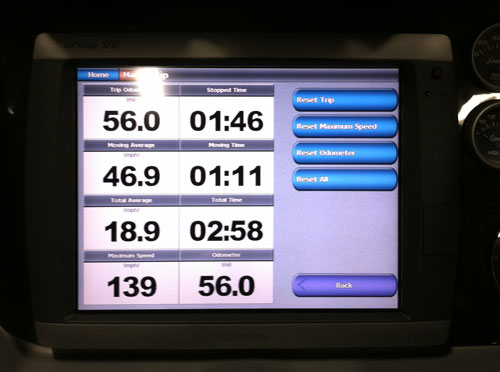 Scotto left the new 44-footer at Outerlimits for cabin installation, which he said will be completed this spring. He chose the discontinued 1075SCi engines because he felt they were appropriate for the boat and his needs.

“I’m not going to race this boat—I’m going to do poker runs,” Scotto said.  “The 1075s are very reliable and my mechanic can fix them without any special tools. Plus, with a pair of 1350s the boat would be out of control, for me. Running almost 140 mph in a 44-footer is just fine.

“I have known Mike Fiore for 25 years—he built my first Hustler,” he added. “He is an amazing boat builder, and he and his family are phenomenal people.” 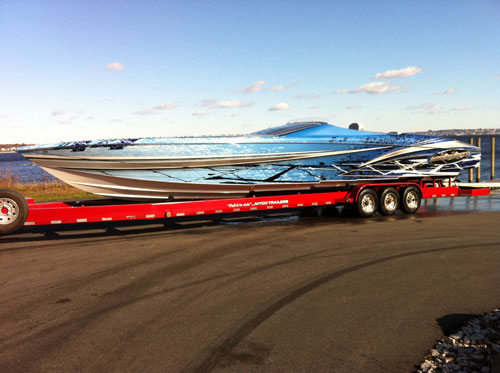