This 40-foot MT is reportedly among the first models to be equipped and running with Mercury Racng 1100 engines.

Dial in continues on a 40-foot Marine Technology, Inc., catamaran, reportedly one of the first to be powered by twin Mercury Racing 1100 engines, at TNT Custom Marine in Miami. According to John Tomlinson, the co-owner of TNT, the 40-footer has already run more than 160 mph.

“I expect to get it to 165, 166, by playing with props and gear ratios,” he said. “The owner wants me to get the ‘big number,’ just like everybody does, just to see how fast it can go, then set it up for the way he likes to drive, where it will probably run in the mid 150-mph range.”

The cat’s “maiden voyage” was in November during the Florida Powerboat Club’s annual Key West Poker Run. Tomlinson said he’s been impressed by the 1,100-hp quad overhead cam turbocharged engines in the cat.

“They don’t pull as hard as the 1350s, but they definitely pull harder than the 1075s,” he said. “I think they are the perfect engines. They run on 89-octane fuel and you can get that anywhere. Plus, I think they’ll run for 300 hours before they need to be rebuilt—the 1350s are supposed to run for 250 hours.”

The 40-footer has a unique seven-seat cockpit, with three buckets up front and four in the rear.

The 40-footer is also MTI”s first cat to be equipped with a seven-seat cockpit. Three seats are in the front of the cockpit, and four seats are in the rear. The owner, who hails from Switzerland but reportedly spends eight months a year in south Florida, ordered the cockpit based on the number of people he usually has on board. 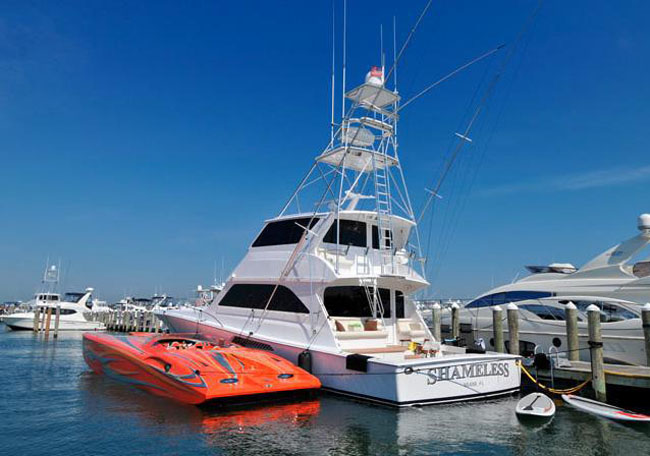