Earlier this week I caught up with Alexi Sahagian of Boostpower USA in Newbury Park, Calif., and got the chance to see firsthand a pair of the company’s 2,200-hp engines sitting in a 40-foot Marine Technology Inc. (MTI) catamaran owned by Dave Marabella of Vista, Calif. 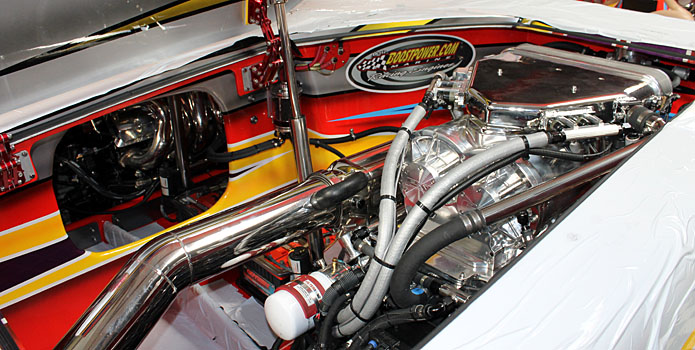 The first set of 2,200-hp engines from Boostpower USA reside in a 40-foot catamaran from Marine Technology Inc.

All I have to say is wow. The impressive 814-cubic-inch supercharged engines are selectable from 1,800 hp on pump gas to 2,200 hp with a minimum 113 octane. Sahagian has been running 115-octane C16 VP fuel in the engines, and has put more than 60 hours on them between the dyno and the time spent this summer and fall in Marabella’s MTI on Arizona’s Lake Havasu or in the Pacific Ocean.

The “mega” big blocks, which were developed by Sahagian and his friend and mentor Sonny Leonard of Sonny’s Automotive Racing, took the place of the 1,500-hp Boostpower USA engines that were in the boat for the last few seasons. Sahagian said Marabella also has a second set of engines and, get this, they are being used for research and development to see if there’s more power available.

“We just took the boat off the water two weeks ago and have looked over the engines,” said Sahagian, who started Boostpower USA in the late ’80s. “We’re going to do some gear changes now to see what we can do to increase the drivability at lower speeds. We’re also blueprinting the (Mercury Racing No. 6) drives like we do every year just to make sure everything is straight. We’ll probably have this thing back in the water by mid-January.”

Sahagian didn’t say how fast the boat runs, but one can guess that the 200-mph mark is within reach if set up appropriately. He did say that the boat runs really nice and the power is smooth, adding that Marabella has been pleased with its performance.

For Sahagian, a customer such as Marabella is a match made in heaven as he is able to do as much beta testing as possible in exchange for a fair price on the first set of motors. So, before releasing the product to other customers, Sahagian can analyze the engines on the dyno and put them in a boat for real-world testing.

Speaking of dyno testing, here are a couple of links to some pretty cool videos of the engines, which cost about $140,000, in action.