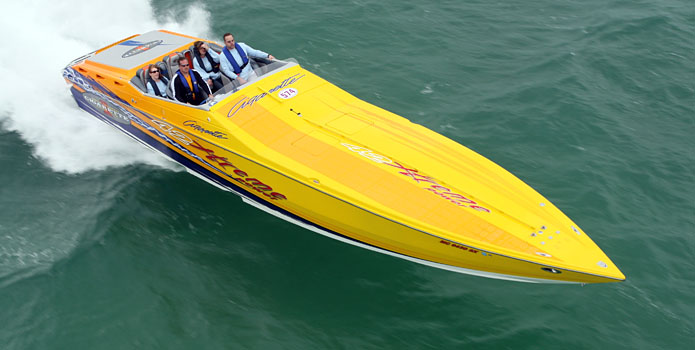 While doing research for an in-depth feature on Chief Performance for the next issue of Powerboating in Paradise magazine, I was introduced to Dave Postill, the owner of a 2008 Cigarette Racing 42X who lives in Florida with his wife, Laura. Through a recommendation from Stu Jones, president of Florida Powerboat Club, which publishes Powerboating in Paradise and organizes next month’s Key West Poker Run, Postill turned to Tommy Hofstetter and the crew at Chief Performance in Fort Lauderdale, Fla., to handle a significant repower of his 42-foot V-bottom.

Previously propelled by twin Mercury Racing 850SCi engines and No. 6 drives, the boat was de-rigged earlier this summer as Postill opted not to rebuild the supercharged engines, which had 400 hours. Instead Chief Performance stripped the mechanical components throughout the boat to make room for a new set of Mercury Racing 1350 engines and M8 drives with Digital Throttle & Shift technology.