Just like the many builders that use Livorsi Marine gauges and controls in their boats, the Grayslake, Ill., company is in the midst of boat show season and looking forward to all of the new product debuts at the Miami International Boat Show. 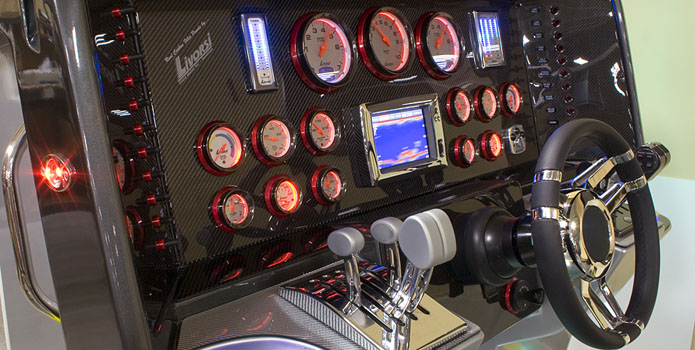 Livorsi Marine will have its new interactive twin-engine display available to try at the Miami International Boat Show in February. Click photo to enlarge

Not to be left out, Livorsi will be sporting its new interactive twin-engine display at its booth (T-48) in the Miami Beach Convention Center when the show opens on February 13. Operators can stand behind the impressive helm and interact with the company’s Vantage View gauges, SmartCraft Digital Throttle & Shift (DTS) controls, LED indicators and Garmin display.

Along with the company’s LED cupholders on each side of the helm, Livorsi included two sets of controls to demo—the new Mercury-licensed SmartCraft DTS control and the new mechanical throttle and shifter with shorter handles in a gunmetal gray powder coating. The ergonomically shaped knobs and arched controls sit in an arched base plate. The controls are mounted on each side of the black Isotta Carlotta steering wheel, which is also available through Livorsi Marine. Founder Mike Livorsi and the rest of the Livorsi team invite you to stop by the booth and captain the company’s new display.

Livorsi’s sister company, Custom Marine Inc. (CMI),  is going to be just down the aisle in booth T-41. Along with various headers, tailpipes and more, CMI will have its new XTS mufflers (right) on display. The
stainless-steel exhaust tip silencers, which you can learn more about
by downloading this pdf,  are engineering to reduce sound without creating unwanted backpressure.

Highs and Lows from 2013: Mike Livorsi