A little more than a year after purchasing the RPM molds (read the story), owner Joe Malich made a deal with Lavey Craft owner Chris Camire to build the 26-foot cat and handle sales for the boats beyond the Pacific Northwest, which is Malich’s territory. 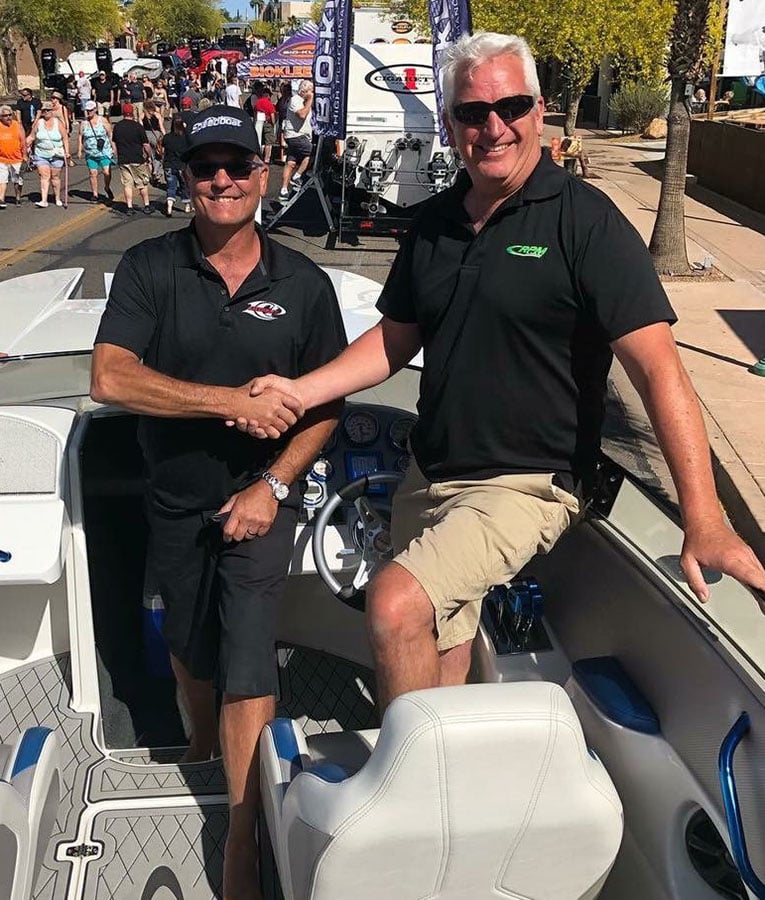 While in Lake Havasu City to cover the event, I caught up with both Camire, who was proud of the new outboard-powered 2750 NuEra that made its debut at the Street Party (look for a story on the new boat later this week) and Malich (right, click image to enlarge) to discuss the partnership.

“Joe and I have been talking for several weeks about this deal—actually he approached me last year about building the boats for him but the timing just didn’t work out so he had someone else build them until now,” said Camire, who was as happy as I’ve seen him in several years as business at Lavey Craft has been picking up. “The timing was better now and we’re excited to start building the RPM 26—it’s a great-running boat with a great look. We have a different way of doing things here at Lavey and I think it will show in the finished product.”

Camire said Lavey Craft is going to finish one of the 26-foot cats Malich has already sold and that they should start working on the first “RPM by Lavey Craft Motorsports” soon. In fact, he has a few customers interested in getting one of the first built by the Corona, Calif., company that is best known for its high level of workmanship and attention to detail. He also said that Lavey Craft’s product liability insurance is a major plus for Malich and the RPM brand.

“I think this is going to be a great boat for us, and with our lamination schedule, workmanship and gelcoat capabilities, I believe we can make it even better than it was before,” said Camire, adding that the company recently hired an employee from Hallett Boats and currently has two 29-foot NuEra V-bottoms in production as well as a pair of 24 NuEras coming down the line. “We know what the boat can do performance wise, it’s a great, fast hull. In my opinion, Steve (Tripp, the late founder of RPM) laid them up pretty light. I think we can build them a little stronger without really affecting the weight thanks to the composite recipe we’re using.”

Camire said Malich is still going to handle sales in Idaho, Oregon and Washington because “he’s great at it and passionate about the brand.”

“I feel like Lavey Craft is going to bring the boat to the next level in terms of production,” said Malich, who added that he had a great time running around Lake Havasu in the company’s new 26-footer powered by twin Mercury Racing OptiMax 300XS engines that was built for Mike Livorsi of Livorsi Marine. “Chris and his team are super hands on and aren’t afraid to put in the extra time to get everything just right. With its competency in the graphics department, I think Lavey Craft is going to make the 26-foot cats look even better.

“Ultimately what it comes down, because our boating industry is so small, is that if you don’t make your customers happy you won’t be successful,” he added. “I’ve had a lot of success in doing that over the years and I know Lavey Craft has too. I think this is a win-win for everyone and I can’t wait to see what the future holds.”