Your go-to source for performance boating.
HomeIn the NewsLatham Marine Excels Once Again in Key West

To no one’s surprise Bob and Kathy Latham—the husband-and-wife team behind Latham Marine—were enjoying the wonderful weather and competitive racing at this year’s Super Boat International Key West World Championships. A former offshore racer who has been a mainstay in Key West, Fla., for more than 30 years, Bob Latham came with Kathy and their daughter, Amanda, to catch the races and see his innovative marine components in action. 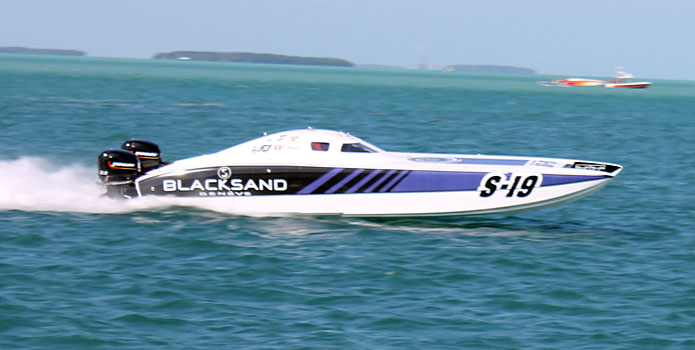 Latham, who founded the Fort Lauderdale, Fla., company nearly 40 years ago, has been engineering and building performance parts for all types of boats, but his reputation was built in the brutally punishing environment of offshore racing. And once again, many of the boats with Latham Marine hardware at the 32nd annual event took home the world championship.

Among the highlights for the Latham Marine team was the impressive first-place finish of Gary Ballough and Omar Danial, who ran Blacksand—Ballough’s outboard-powered 32-foot Doug Wright catamaran—to the Superboat Stock championship for the second year in a row. The victory was especially sweet because Latham Marine’s invention of hydraulic steering for outboard race boats is what catapulted the company to the industry leadership position it enjoys today.

“Winning never gets old, even after 40 years,” Bob Latham said. “We built our business on finding solutions for boaters, from the fastest racers to the day cruisers and sports yachts. We’d like to congratulate the entire fleet as we know what it takes just to make it to the Worlds let alone endure a week of competition in some of the toughest racing water on this side of the Atlantic.”