When veteran offshore racer Alvin Heathman set out to bring as many teams as possible to Missouri’s Lake of the Ozarks for the inaugural Lake Race 2013 presented by Mountain Dew and Formula Boats of Missouri, he knew the best way to do so was with prize money. 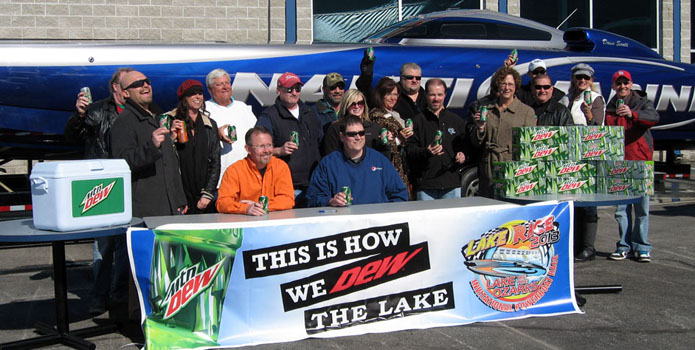 With a $75,000 total purse, the Lake Race 2013 on Missouri’s Lake of the Ozarks is less than a month away.So far Heathman has come through and made the invitational race, which takes place June 6-9, a win-win for any offshore team, bringing the total purse up to $75,000 and eliminating any entry fees or boat registration. The organizers behind the event—the not-for-profit Bagnell Dam Strip Association—are also bringing live television coverage to the equation with coverage running from noon to 3 p.m. on Saturday and Sunday on Missouri’s FOX KRBK-TV.

“I really cannot remember if any opportunity for boat racers has been offered to showcase their teams in such a way with lower costs to them and bigger rewards,” Heathman said. “The Lake of the Ozarks has bucked up in a big way—now it’s up to the racers to bring the show.”

According to Heathman, the event’s run-what-you-brung class—Performance Xtreme (PX), a canopy class with unlimited power—is offering a $40,000 prize purse sponsored by Mountain Dew and Formula Boats of Missouri with $18,000 going to the winning team and $10,000, $6,000, $4,000 and $2,000 going to places second through fifth respectively.

Catching Up With Travis Lofland: The Adventure Continues