Your go-to source for performance boating.
HomeIn the NewsLake of the Ozarks Shootout Update: Four Highlights

The first day of the 2013 Lake of the Ozarks Shootout is in the books and it set a high bar. Here are four highlights—three amazing liquid-mile top-speed runs that will stand up as class wins unless bested tomorrow and one great encounter for speedonthewater.com—from one remarkable day. 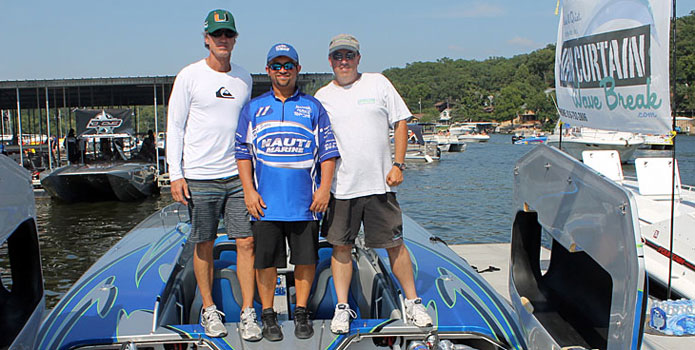 From left: John Tomlinson, Myrick Coil and Mike D’Anniballe stirke a pose on the deck of the Sterling 1700-powered Skater cat after a successful day at the Shootout.

My Way Hits Runs 209 mph: No question, Bill Tomlinson’s My Way, a 50-foot Mystic catamaran with 6,000 hp worth of turbine engines, came into this year’s Shootout as the odds-on favorite to take the Top Gun title. But being the “favorite” guarantees nothing. To win, you have to perform, and Tomlinson did exactly that.

GottaGo2 Outerlimits Runs 149 mph: When they arrived at the docks at Captain Ron’s Bar and Grill this morning, Mike Fiore of Outerlimits and his customer Dave Scotto, the owner of the first V-bottom with Mercury Racing 1650 Race engine power, would have been happy to see 145 mph at the end of the 52-footer’s first run. The boat reached 149 mph. Said Fiore, “Everything worked perfectly.”

Sterling 1700 Skater Hits 195 mph: Three years ago, Mike D’Anniballe announced he was building 1,700-hp turbocharged engines. The saga of the Sterling 1700, which has been reported regularly on speedonthewater.com since the project began, reached a happy ending today when a pair of those engines powered the boat to a top speed of 195 mph with John Tomlinson of TNT Custom Marine throttling and Myrick Coil of Nauti-Marine driving. Said D’Anniballe, “I couldn’t be happier. If things go well we’ll run the same engines in the Lake Cumberland Poker Run in the next couple of weeks.”

Speedonthewater.com Finds The Real White Lightning: Last week, we ran a photo of Dennis Pool’s 38-foot white Skater catamaran making a run during the 2012 Shootout and called it, “Image of the Week: White Lightning at Lake of the Ozarks.” Turns out there is a popular local V-bottom, a impeccably restored 42′ Apache with twin 1,300-plus-hp engines from Smith Power, called White Lightning. Friends of Travis Reed, the boat’s owner, got in touch with us and we met him this afternoon. Look for a project profile on the 42-footer on speeodnthewater.com soon.

Lake of the Ozarks Shootout Ratings Through the Roof