Your go-to source for performance boating.
HomeIn the NewsLake of the Ozarks Shootout Pushing for Better Top-Speed Accuracy in 2012 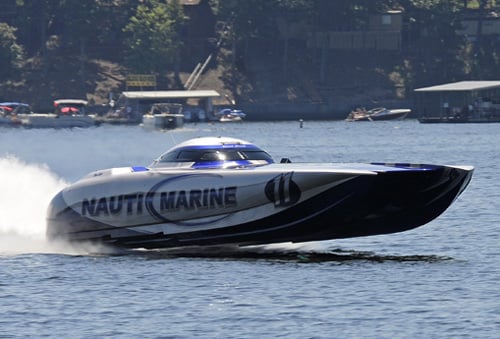 Just as My Way did at the 2012 Shootout, Nauti-Marine (show above) experienced a significant discrepancy between its own GPS top speed and the official radar-recorded top speed.

Prompted by concerns from participants about top-speed accuracy, the organizers of annual Lake of the Ozarks Shootout are purchasing new radar equipment for the Missouri-based event. According to organizer Ron Duggan, the last two years of the Shootout, in which the Top Gun winners saw higher speeds on their in-boat GPS units than the event’s radar guns recorded, finalized his decision to purchase new radar gear.

“We inherited the radars guns when we took over the event, and they’re like nine years old,” said Duggan. “There is much newer and better technology available now, and we are taking advantage of it.

“If the boats are running 218 mph, 220 mph, that’s something we want to see and record accurately,” Duggan added. “It’s good for the participants and it’s good for the event.”

Last year’s Top Gun winner, the 50-foot Mystic catamaran Nauti-Marine piloted by David Scott and John Tomlinson, ran a top speed of 208 mph on the Shootout’s radar but showed 217 mph on the boat’s GPS as it passed under the radar boom. This year’s winner, My Way, another 50-foot Mystic, experienced similar discrepancies between its official top speed of 208 mph and its in-boat GPS top of 218 mph.

“Our GPS records our top speed over a measured mile,” said John Cosker, who throttled the My Way cat during the event on Sunday. “It had our top speed at 218 mph.

John Tomlinson, who as noted also saw a large top-speed discrepancy during the 2010 event, had no explanation for it.

“I have no idea why it happens,” he said. “Maybe the radar catches you earlier in the run. But I do know that last year I chopped the throttles right under the boom. The boat was slowing down and the GPS was still going up, still catching up with our top speed.

Duggan said significant discrepancies did, in fact, begin appearing in the past two years with boats that topped 200 mph.

“That could be part of it,” he said. “But we’re going to do everything we can to make sure we get it right.”

Sterling 1700-Powered Skater Back on The Water This Week