Qatar Team Obliterates Shootout Record with 244-MPH Top SpeedThe first day of the 2014 Lake of the Ozarks Shootout in Missouri will go down as perhaps the best and worst day in the 26-year history of liquid-mile top-speed event. The morning was barely an hour old when Mike Fiore and Joel Begin attempted their first run in Begin’s new 46-foot-long Outerlimits catamaran.

About three-quarters of the way down the course at approximately 150 mph, the 46-footer caught air and flipped. After shooting 50 to 60 feet in the air, the cat landed on the throttleman’s side of its canopy and came to rest right side up. While Begin, the driver of the cat, was able to make it onto the rescue boat under his own power, a critically injured Fiore had to be extracted from the cockpit by the emergency responders.

Recycler, Don Onken’s 50-foot Mystic with four V16 engines, was one of the show-stoppers at the docks of Captain Ron’s.

Fiore was airlifted to University Hospital in Columbia, Mo., admitted to the emergency room and later to the facility’s Intensive Care Unit. Fiore remains in critical but stable condition but is expected to recover. Begin was taken to the local Osage Beach, Mo., and reportedly escaped the crash with no broken bones but is being kept overnight in the hospital for observation.

The accident cast a pall over the crowd and the competitors, and it looked as if the event might not continue, much less continue with any positive momentum. But after an hour of clearing the debris left on the course by the wrecked 46-footer, the Shootout officials gave the green light for runs to begin again. (They would not let any boats capable of exceeding 120 mph run until a rescue helicopter was brought on scene.)

That was until the Spirit of Qatar’s turbine-powered boat, a 6,000-plus-hp 50-foot Mystic Powerboats catamaran beast called Al’ Adaam 96, took its second run. In its first pass through the course, the 50-footer’s emergency parachutes had accidentally deployed and slowed the boat to a top speed of 210 mph. But the team’s crew removed the chutes, driver Sheikh Hassan bin Jabor Al-Thani and throttleman Steve Curtis made another run down the course.

Bob Bull’s Marine Technology Inc. catamaran, CMS, competed against a plane in an exhibition race along the Shootout course.

“That was incredible,” Curtis said. “I’m still shaking—there’s still a lot of adrenaline pumping through my bones. It’s a great feeling yet I can’t help but think of my really good friend Mike (Fiore) and hope he can pull through.”

Another stunning Mystic was Don Onken’s catamaran Recycler, which ran 188-mph with driver Myrick Coil, whose supportive wife gave birth to his third child earlier in the day, and throttleman John Cosker, the owner and founder of Mystic.

“We were getting towed out in the Recycler boat when I saw (the Spirit of Qatar team) start,” Cosker said. “The start didn’t look fantastic so I wasn’t sure if it would be that good of a run. But when I heard 244 mph I was amazed. It is incredible—it really is.”

Cosker, who said he believes a boat built specifically for the Shootout could probably run faster with the right power, was impressed with the Spirit of Qatar team’s efforts in his 50-footer.

“I’m very proud of that speed,” Cosker added. “I wished we got a little more out of the Recycler boat, but we’ll be back tomorrow to try to go faster. The power is there—we’re just trying to harness it right from the start.”

Another cool highlight was that Lake of the Ozarks’ own Tristan Collins ran 80 mph in her first run at the event she’s been attending since she was a kid. Collins, outfitted in a pink helmet and a pink lifevest, drove Tyson Garvin’s Skater 399 V, which is powered by a pair of 480-hp Cummins diesel engines connected with Arneson ASD8 surface drives.

Rock The Bay Pulls 50-Plus Boats To Chesapeake Waters 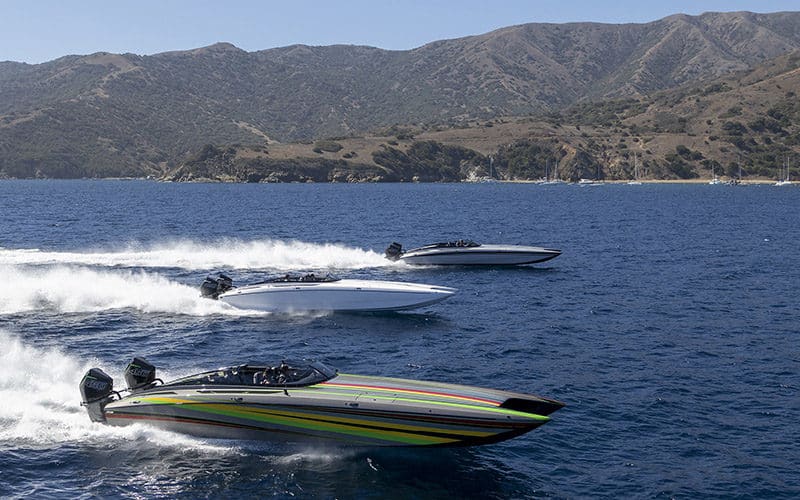