With less than two weeks to go before it kicks off, the Lake Cumberland Poker Run Sept. 6-8 could attract the largest fleet of high-performance powerboats in its 20-plus-year history. Approximately 80 boats currently are registered for the upcoming event on the Kentucky waterway, according to Bill Jasper, the owner of State Dock, a full-service marina and houseboat rental operation that has been hosting the event for the last 11 years. 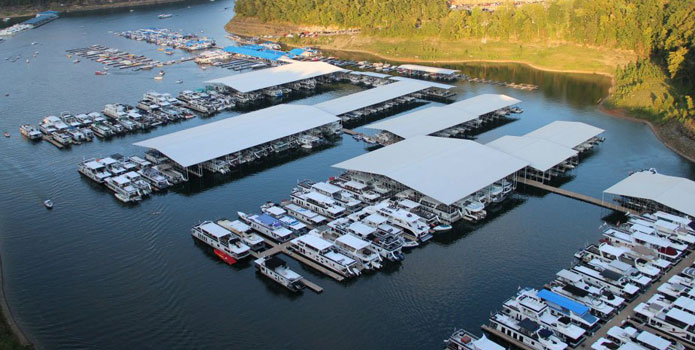 The 97-mile run, which has five stops including the lunch break when it returns to its State Dock starting point, on Saturday (Sept. 7) costs $350 to enter and reportedly pays out $7,100 in prize money. The events attract some of the best-known go-fast boat hardware in the country such as Glenn Salyer’s 47-foot Outerlimits catamaran powered by twin 1,800-hp turbine engines.

“This is my sixth time in the run,” said Salyer, who calls Lake Cumberland his home lake. “It’s one of my favorite poker runs because it’s a big lake and it’s long, and because of the atmosphere the organizers have created it attracts great powerboats.”

Unique to the Lake Cumberland Poker Run is its extensive houseboat “party village,” which serves as the home base for most of its participants.

Salyer, who owns this turbine-powered Outerlimits cat, has participated in the run six times.

“We rent over 60 houseboats, which is probably the largest houseboat rental fleet in the country,” said Jasper. “That gives us a unique opportunity because in most events of this size all the participants can’t stay in one place. We have two large rental docks, and we reserve one for 42 houseboats rented by people in the event. Each houseboat has four to eight bedrooms, which means we have 200 bedrooms on the docks with patios out front and hot tubs on the upper deck. It creates a ‘unique’ environment. We call it ‘houseboat row.’

“We clear out the second dock for the poker run boats,” he continued. “It has 40 slips that are 60 feet long, so it can hold all the boats. And then there are the private slips, which handle privately owned houseboats, cruisers and other boats.”

Entertainment for the weekend includes live bands on the party barge, as well as a DJ and “dance floor” at State Dock that is organized and sponsored by Total Marine Performance. (Additional sponsors include Dave’s Custom Boats, Lake Cumberland Marine, Nordic Boats, Nor-Tech, Pro Marine and Statement Marine.)

Organizers are expecting a record fleet on the stunning Kentucky lake.

The poker run reportedly attracts more than 25,000 spectators, though direct access to the official poker run events and houseboat village is limited to participants—wristbands are given to each group during registration. While there is an awards presentation after the run, that is the extent of the event’s “formal” activities on Saturday. But the participants tend to stay close to home until they leave on Sunday, according to Jasper.

“Because they’re so spread out, everybody tends to disappear at other poker runs when the run is done,” he said. “But this thing never stops. Once people park their truck at this one, they’re done moving for the weekend.”

Editor’s Note: Look for a follow-up report on the Lake Cumberland Poker Run on speedonthewater.com.