Fred Kiekhaefer, who founded Kiekhaefer Aeromarine in 1983 and sold the company, which eventually became Mercury Racing in Fond du Lac, Wis., to Mercury Marine in 1990 is leaving the company. Kiekhaefer will remain is his role as president of the high-performance marine engine company until the end of 2012. 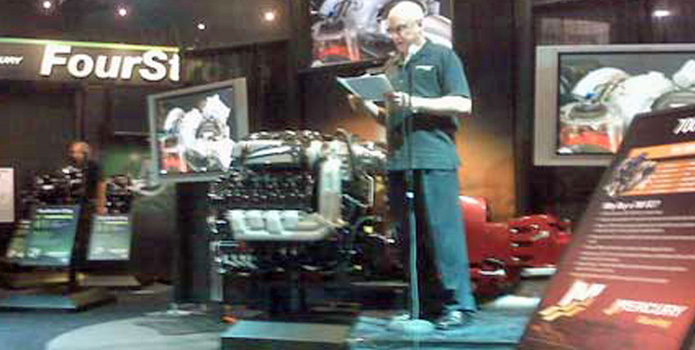 Kiekhaefer in 2010 during the unveiling of the Mercury Racing 1350 at the Miami International Boat Show.

Kiekhaefer, who holds a degree in engineering as well as a master’s degree in business administration, has worked in the marine business for more than 30 years. His father, the late Carl Kiekhaefer, is well known as one of the industry’s pioneers.

Kiekhaefer will work as a part-time consultant for Mercury Racing in 2013 and 2014.

“I’ll still be wearing the Mercury Racing colors at shows and events,” he said during a brief telephone interview this afternoon.

“I’ve have been grooming Eric for this position for a number of years, and he is extremely well qualified for it,” said Kiekhaefer. “I know he will do a great job.”

“The achievements of Fred Kiekhaefer have been integral to the success of Mercury Marine for two decades and, more specifically, to Mercury Racing,” said Mark Schwabero, president of Mercury Marine, in a press release. “Fred’s genetic association to boating was strengthened by an impressive education and a powerful desire and commitment to create the best-performing marine engines.

“Fred has brought many key innovations to Mercury, and his influence will be felt here and throughout the world of boating for many years,” he added.

Kiekhaefer’s home base will be in Colorado, where he will be moving with his wife, Carol, in the coming year. 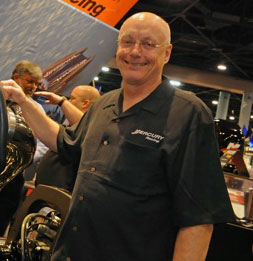 Killer Auction Items, Drink Specials And More On Tap For Speed On The Water Key...