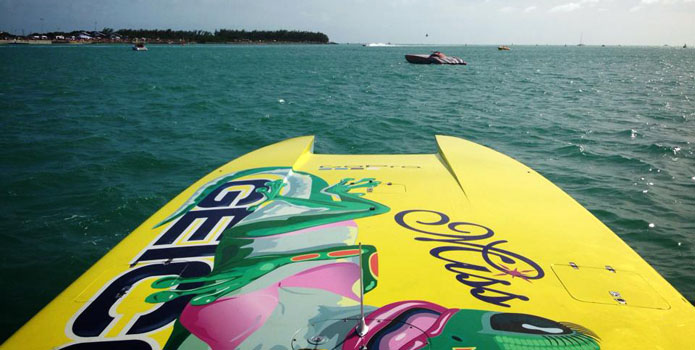 Miss GEICO teammates Scott Begovich and Marc Granet had a strong showing in the first race of the SBI Key West World Championship.

The first day of the Super Boat International Key West World Championships lived up to the hype. Due to nasty, wind-whipped conditions—not uncommon for Key West—race officials shortened the first stretch of the course so teams wouldn’t have to withstand the conditions further offshore, which were reported to be at least 8 to 10 feet. Here’s a look at the highlights from the day.

Miss GEICO Commands Attention With Win: By bringing home the win in Miss GEICO catamaran, the veteran team of Scott Begovich and Marc Granet got off to a fine start in the extremely competitive Superboat Unlimited class. The duo battled Spirit of Qatar and CMS in a back-and-forth first lap, but managed to keep pulling ahead en route to a commanding win. Spirit of Qatar, one of the Qatar Team’s three race boats, finished 45 seconds behind Miss GEICO and 30 seconds ahead of CMS.

“The boat felt great,” Granet said after the race. “The crew worked so hard in getting everything balanced out and set up right—that really shows in a race like today. I don’t know if you could see it on the broadcast but it was big today—we’re talking 30-mph winds. I think John Carbonell (SBI president) made a smart call by bringing in the course. If we would have run another mile out, I think the rougher seas could have created potential problems.”

Even though the teams have been talking up a big game, Granet wasn’t happy to see Sheikh Hassan bin Jabor Al-Thani and Steve Curtis broken down with a driveshaft problem in the Qatar Team’s turbine-powered 50-foot catamaran. The team completed two laps, while its competition—Miss Mary Mac—did not start.

Steve Quick Jewelers Team OK: In the first race of the day, the Steve Quick Jewelers team of Steve Quick and Lee Austin are reportedly doing well after stuffing their Superboat Stock boat in the back stretch between the first and second turns. The duo were attempting to chase down the leaders, Kyler Talbot and Jay Muller in the Talbot Excavating boat, which finished first in the race ahead of Nick Dorcich and Isaiah Blount in the Tarpon Pointe Grill boat. Ryan Beckley and Chris Schoenbohn finished third in the 5 Brothers Grocery boat.

Stihl Takes Superboat Class: With seven Superboat class teams on the starting line (CRC was scratched after yesterday’s crash during testing), it was the Stihl team of JR Noble and Grant Bruggemann that got the jump at the start and never looked back. Leading from start to finish over the 30-mile race, Stihl looked solid as it held onto its commanding lead over the second-place team, WHM Motorsports. In a tight battle for third place, Warpaint edged out Broadco. BurgerFi rounded out the top five as JD Byrider and Spirit of Qatar broke out.

Outerlimits Comes Out Strong: In the Superboat Vee class, the Snowy Mountain Brewery Outerlimits proved to be too much for the rest of the field as Michael “Doc” Janssen and Brian Forehand drove the 29-footer to the day one victory. In the competitive Superboat Extreme class, the Outerlimits SV43 team of Joe Sgro and Giancarlo Cangiano overtook the Lucas Oil/MAV TV Silverhook team of Nigel Hook and Michael Silfverberg early in the race and managed to hold on for the victory to open the three-race event. A trifecta of Fountains followed suit as Twisted Metal Motorsports took third, Instigator finished fourth and Airway Aerospace fifth.

Production Class Racers Battle it Out: In an extremely close Manufacturer Production 4 class battle, Anger Management managed to squeeze past Crazy Chicken in a race that was decided by just one second. Two Cruel finished 15 seconds back and held off Rum Runners by just six seconds to round out the podium. In the Manufacturer Production 3 class, Black Pearl bested Microlink and Team Kilt to bring home the checkered flag on day one.

The racing action, which continues Friday and wraps up on Sunday, can be followed via livestream on superboat.com.