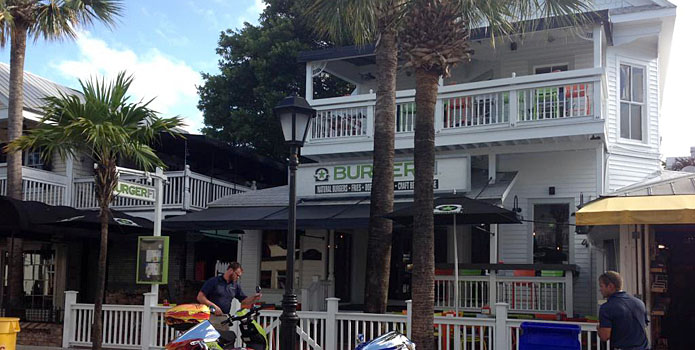 It’s not often that we write about burger restaurants on speedonthwater.com. But most burger joints don’t have anything to do with performance boats. Well the latest BurgerFi location, which opened in Key West, Fla., a month ago, definitely does.

Not only is the two-story restaurant located on Duval Street—the hub of much of the activity during the Key West offshore world championships and poker run that comes to town every November—it is one of two BurgerFi franchises co-owned by Gino Gargiulo, the notable performance boater who used to own the unforgettable Mercedes-themed catamaran from Marine Technology Inc. (MTI) and currently owns the 44-foot MTI adorned with the BurgerFi logo.

But the connection doesn’t stop there as John Rosatti, a go-fast boat enthusiast who owns two Cigarette Racing V-bottoms—a 50 Marauder and a 39 Top Fish—and the 164-foot Christiansen mega yacht Remember When, is the founder and chairman of the fastest-growing all-natural burger franchise in the country. Rosatti reportedly has a “BurgerFi” catamaran in the works—a 52-foot MTI that’s expected to be complete in time for the Miami International Boat Show.

“We opened a few weeks ago just in for Key West Biker Week,” said Gargiulo, who owns two other businesses in Fort Lauderdale, Fla.—Oil Can Man and Clearly Exotic Car Coverings. “I was a BurgerFi customer before I opened my first location in Aventura. I knew there’d be a lot involved with opening one in Key West, but I wanted that location so bad. Other than a couple of nice sit-down restaurants in Key West, we all know everything else is hit or miss down there.

“I wanted to have a clean place where everyone could come hang out, get a good burger and a drink, and just enjoy themselves,” continued Gargiulo, who has a few special events planned at the new establishment he co-owns with Rosatti and Michael Berkman throughout the week of the offshore races and poker run. “To me, the place is such a perfect fit for all the boating people. We’ll also be in the poker run village with our BurgerFi food truck and lending our support to the Florida Powerboat Club event.

According to Gargiulo, there are nearly 40 BurgerFi restaurants open across the country and more than 200 franchises sold, so you can probably expect to find a BurgerFi close to you in the near future (click here for a list of locations). In the meantime if you’re in Key West for the poker run and/or the Super Boat International world championship, make sure to swing by 221 Duval Street and grab a burger and an ice-cold beverage. Gargiulo promises tons of free stuff and drink specials.