Completed in mid-2012, the 29-foot Outerlimits V-bottom Snowy Mountain Brewery made short work of the Superboat V offshore raceboat field during that year’s Super Boat International World Championships in Key West, Fla. It was the second new dominant V-bottom—the first was a 30-foot Fountain called Watch Your Back—owned and driven by Dr. Michael “Doc” Janssen, an internationally renowned spinal surgeon with a passion for offshore racing. 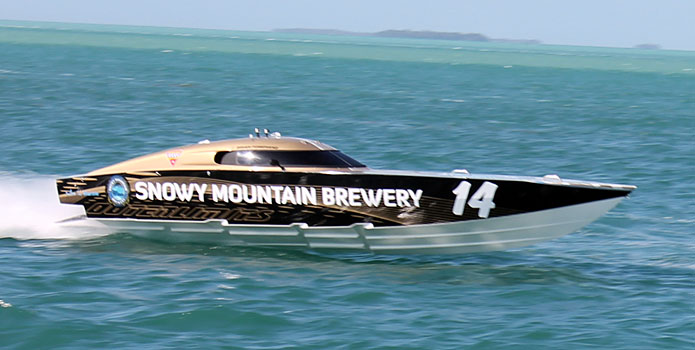 The owner of Snowy Mountain Brewery, Janssen said he is delighted at the influx of new boats and competitors in the Superboat V class.

Janssen, who plans to compete with teammate Dan Davies in the cockpit of Snowy Mountain Brewery during the 2013 SBI Key West Offshore World Championships said he was delighted to read that the new team of Brit Lilly and Kevin Smith in Hurricane of Awesomeness was “gunning for” (Read the story) Snowy Mountain Brewery and two other teams in the single-engine canopied V-bottom class. He also said he saw the news as gratifying.

“In 2010, we were attacked for ‘destroying’ the SVL (the former class designation for what is now called Superboat V) class with the most advanced technology (the then-new 30-foot Fountain),” Janssen said. “Over the past four years, many teams have delivered new boats and hulls with dramatic increases in safety and performance. In hindsight, both the 2011 Fountain SVL Watch Your Back and the 2013 Outerlimits SVL Snowy Mountain Brewery have raised the bar in Superboat V racing.

“Our team has been testing the Outerlimits at high altitude in the Rocky Mountains, where there is typically a little less oxygen,” he added. “We wish all the teams a safe journey to Key West and we are anticipate exciting racing.”