Your go-to source for performance boating.
HomeIn the NewsIt’s In Begovich’s Blood 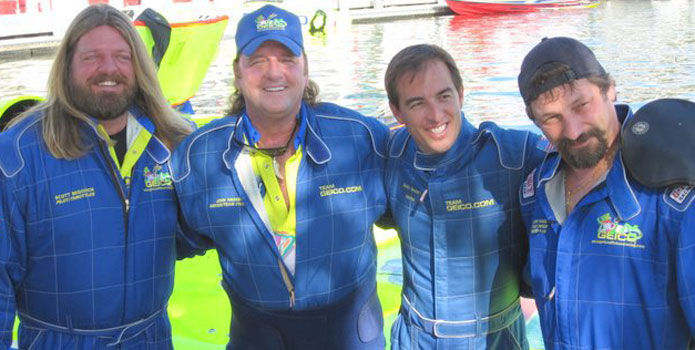 Here are four fun facts about Scott Begovich, the throttleman for all the Miss GEICO catamarans since the team took form under the AMF Offshore Racing banner in 2005.

1. The first catamaran he ever rode in—and throttled—was the team’s 40-foot Platinum with turbine power.

3. Thanks to an ash-filled urn duct-taped inside the Miss GEICO cockpit, he has raced with, so to speak, his father, John, in every event the team has entered since he died in 2009. (Says, Begovich, “We use duct tape to hold the urn in place because my dad would have liked it that way.”)

4. He paid off the loan for his first offshore raceboat, which he bought almost 13 years ago, earlier this month.

You know the Miss GEICO Offshore Racing team, of course, primarily through its driver Marc Granet. By design, genetic predisposition and more than a little bit of natural selection, Granet is the team’s front man—and both Granet and Begovich like it that way. Sure, Granet enjoys the spotlight. But he also is well suited—far more than Begovich—to the heat that comes with it.

Editor’s Note: Look for an in-depth feature on the state of the Miss GEICO Offshore Racing team in the upcoming July/August issue of Speed On The Water digital magazine, which will go live in late June.