Justin Wagner spent a couple of years planning and designing his Ironman-themed boat, which ended up blossoming from an all-white 2001 Hustler Powerboats 377 Talon a couple of years ago into a movie-inspired machine with lighting, schematics and more in tribute to the Marvel comic book hero. The pride and joy of the founder of Waves and Wheels in Osage Beach, Mo., the popular catamaran made appearances at events on and off the water from Missouri to Iowa to Louisiana, and was a hit—especially among kids—wherever it showed up.

Justin Wagner stands on his new pride and joy, a 46-foot Skater that he will convert into his next Waves and Wheels showpiece.

That’s why it was especially hard for Wagner to move on and put the boat up for sale upon acquiring a notable—especially among offshore racing fans—46-foot Skater Powerboats catamaran that was built in 1997 and raced at one time by the legendary Reggie Fountain as the Fountain-Mercury 76 boat. But Wagner has had some other ideas in his head for some time and it was time to move on to the next project.

The 37-foot Hustler, which was documented over several articles on speedonthewater.com, is currently for sale at Maryland Offshore Marine Center, and Wagner has been drooling over the gigantic—at least compared to the Hustler—46-foot Skater with twin Sterling Performance engines since picking it up last weekend and parking it in his shop.

“I went to see the Skater almost six months ago—it’s been in storage for several years—and on my drive home about an hour after leaving I called back and made an offer,” said Wagner, who has dreamed of owning a Skater since the days when he was running around on Lake of the Ozarks in his first boat, a 26-foot American Offshore catamaran. “I have a lot of sketches and drawings, and everything I’d envisioned seemed doable with the Skater. I knew it right away, too. The same thing happened to me when I came across the Hustler. I’d been working on my Ironman designs for two years and the Talon was the perfect project boat.

“As far as Ironman goes, it’s been a great boat for me and I’ve learned so much about performance boats because of everything we did with it,” he added. “I feel fortunate to have built that boat because it gave us some amazing exposure and some of the most fun I’ve ever had in a boat. From events like our local St. Patrick’s Day parade to stereo shootouts to just coving out, it’s unbelievable how many people have told us how much they love the boat.”

For more photos of the Ironman-themed 37-foot Hustler and the 46-foot Skater, check out the slideshow above.

Wagner, who spent some quality time cleaning up Ironman before letting it go last weekend, said he still can’t believe the Skater is sitting in his shop. Depending on how a thorough onceover on everything in and out of the boat goes, Wagner is hoping to be able to use the Skater as is throughout the summer before stripping it down and beginning his latest Waves and Wheels showpiece.

When it comes to sharing any theme or design ideas for the 46-footer, Wagner is keeping that to himself for now.

“I have a lot of plans—the boat has unlimited potential,” Wagner said. “It’s everything I’ve ever wanted in a boat. Obviously it should be plenty fast, but it’s not like I’m out to set any speed records anyway. I just want to have fun, crush some wakes on Lake of the Ozarks and put some new trick stuff in it. It’s been almost four years since we started Ironman and the Waves and Wheels team has improved dramatically. It’s time to show the marine industry where we’re at now compared to then.” 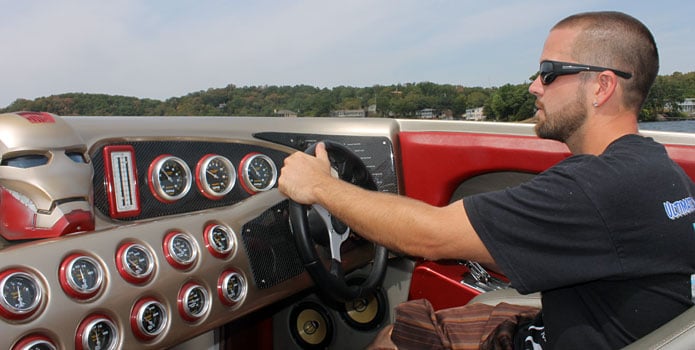 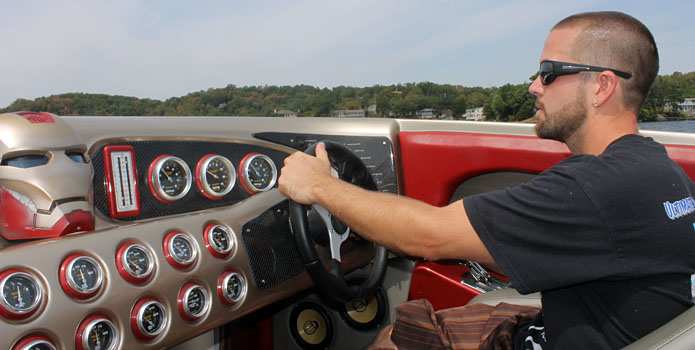