Your go-to source for performance boating.
HomeMagazineInside SOTW Mag: Comeback Of The Year In The 1,000 Islands

Despite steady growth in its first three years, there were no guarantees—as in zero—that the 1,000 Islands Charity Poker Run would make a strong comeback after a two-year pandemic- fueled break. Event organizers Alexandra Buduson, Bobby Cantwell, Ken and Renee Lalonde, Jeff Morgan and Courtney Rutherford knew this long before the first poker-runner signed up for this year’s event. They also knew that if the Clayton, N.Y.-based poker run didn’t come back strong its future was bleak.

So for months, the all- volunteer group of organizers worked their tails off every day, often seven days a week as the event drew closer, to ensure their chances of success.

And with 100 go-fast boats registered, a few hundred delighted participants, a record- setting $102,000 raised for Make-A-Wish of Central New York and wish No. 2,000 for the Make-A-Wish chapter granted to five-year-old Natalie Gondek, who has successfully battled Lymphoblastic Leukemia since she was two years old, succeed they did.

“Every aspect of this event is simply magical,” said Diane Kuppermann, the president and chief executive officer of Make-A-Wish Central New York. “From the boat rides given to our wish kids on Saturday to the support of the Harbor Hotel, area businesses and sponsors, all striving to impact the critically ill kids we serve, we are forever grateful.”

For repeat 1,000 Islands Charity Poker Run participants, the 2022 event was an extended family reunion that began with Thursday night’s powerboat exhibit and finished with the granting of Natalie Gondek’s wish—she and her family are now the proud owners of a Barbie-themed camper-trailer—and a live charity auction. For first-timers such as Taylor Scism of MTI, the event was eye-opening.

“The boating at the event was spectacular,” said Scism, the Wentzville, Mo., company’s client relations manager. “But the best part was watching the wish being granted and the money that was raised at the auction.”

A three-time 1,000 Islands Charity Poker Run participant, Southern California’s Devin Wozencraft agreed. The high- performance marine insurance man, who participates in more boating events in a season that most go-fast boating enthusiasts ever will, described the affair as one of his favorites.

“It’s just such an incredible event,” said Wozencraft, who rented a house in Clayton for a week and ran with Scott Kottmann, Wozencraft Insurance Agency’s Midwest representative, in Kottmann’s MTI 390X all weekend. “The scenery is fantastic, the people are wonderful and the cause— is fantastic.”

Inside SOTW Mag: A Place In The Sun

Inside SOTW Mag: A Place In The Sun 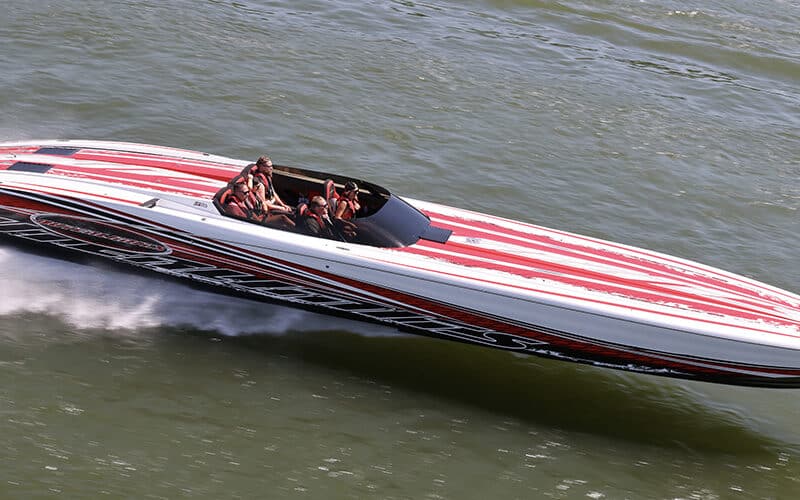