From the red-hot Cigarette Racing Team V-bottom to the whitewater wake exploding behind it as the boat begins to come off plane, there’s plenty to appreciate in this classic image from photographer Jay Nichols. It resonates with anyone who’s ever taken a ride with friends in a high-performance powerboat. 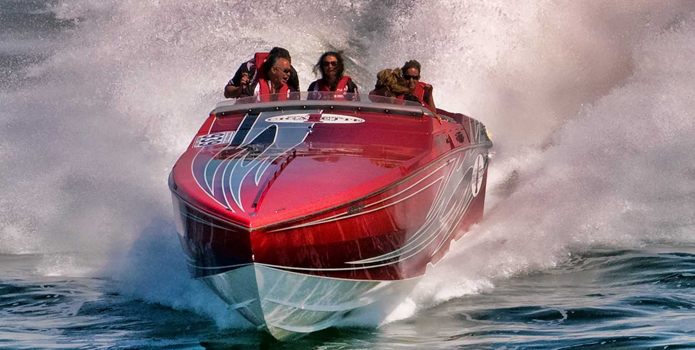 Conversation is challenging in a moving go-fast boat, but that doesn’t stop even the most experienced drivers and passengers from giving it a try. Photo courtesy/copyright Jay Nichols/Naples Image.

This photo, which Nichols captured during the 2013 Miami Boat Show Poker Run, is especially meaningful among those who’ve tried to carry on a conversation at anything above idle speed—because for the most part it’s an exercise in hoarse-throated, shouting futility. Still, no matter how many times you try it and get nowhere, it doesn’t stop you—in the heat of the good-time moment—from trying it again.

Nichols captured the moment perfectly. Take a close look at the enlarged photo above. The driver and the portside passenger are leaning in to holler at and hear one another. The passenger behind the driver clearly wants in on the conversation so he’s leaning forward.

The other two passengers, the woman in the center with her hair in her face and the guy with the shades behind the portside passenger? We don’t know whether or not they wanted in on the cockpit conversation, but they sure appear happy to just enjoy the ride.

Image of the Week: Dazzled by Destin