Your go-to source for performance boating.
HomeSpeed On The WaterImage of the WeekImage Of The Week: SOTW Year In Review Magazine Goes Huge

At 196 photo-filled pages and weighing a little less than two pounds, our third annual Speed On The Water Year In Review collectible magazine is as big as it’s ever going to get—at least as far as we’re concerned. But apparently, that wasn’t enough for Jeff Johnston, Tony Chiaramonte and the rest of the crew at DCB Performance Boats in El Cajon, Calif. So they created two oversized Year In Review covers—plus a pair of same-sized Speed On The Water digital magazine covers from two recent issues—of their own to display at the shop.

To decorate their headquarters, the folks at DCB Performance Boats decided they needed to go big with the covers of Speed On The Water’s 2016 and 2017 Year In Review and recent digital magazines.

And why not? Who wouldn’t want a four-foot-tall, three-foot-wide cover showcasing such gorgeous creations?

We’d be lying if we said we’re not flattered and, OK, a little proud. We think our 2017 Year In Review edition, though far from a perfect magazine, is our best issue to date. And so far, the feedback we’ve received from readers and advertisers, supports that notion.

We’d also be lying if we said we’re sold out of copies. But will be—so order yours by clicking here now.

Click the image above to enlarge and order the 2017 Speed On The Water Year In Review collectible print edition here.

Image of the Week: MTI-V 57 Makes its Mark in Miami 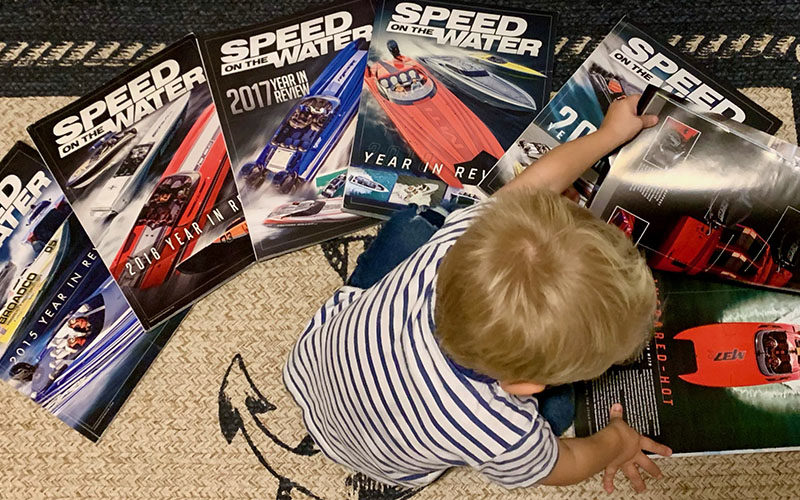