By the time Mark and Eileen Fischer of BoatsDirectUSA.com, a couple of their friends, Jason Johnson and I rounded the corner coming into Key West, Fla., in the Fischer’s 36-foot Deep Impact center console we were done. From a few miles south of Gilbert’s in Key Largo—our lunch stop during the Thursday wave of the Florida Powerboat Club’s annual Key West Poker Run—the ride down, especially near the Seven Mile Bridge where we hit 3- to 5-foot seas whipped into an angry froth by 25- to 30-mph winds, had been cold and nasty. We were ready for dry land and a drink. 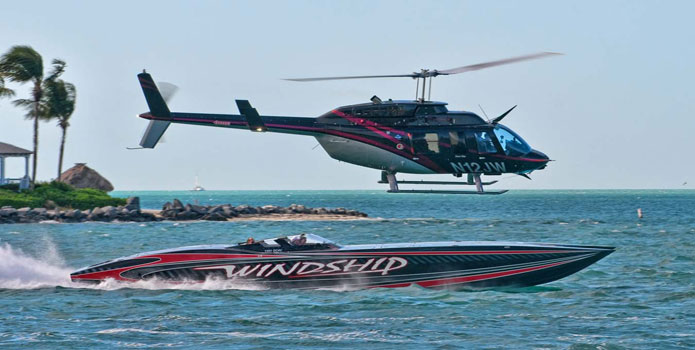 As we made the turn and straightened off at Key West’s Outer Mole, Windship, the well-known 48-foot-long Marine Technology, Inc., go-fast pleasure catamaran owned by John Woodruff, appeared about 50 yards off our port side. Flying low alongside the cat was its support helicopter—from our angle we could not see if the airship was being used for safety or photography. As Windship pulled away from us, we all started hooting and hollering. Talk about a mood changer.

From the giddiness that overtook us in that moment, you’d have thought none of us had ever seen an exotic go-fast boat before. The Fischer’s certainly have owned their share—the 50-foot Nor-Tech, Eileen’s 50 that, like Windship, appeared on the cover of Powerboat magazine while Johnson and I worked there—comes to mind. And Johnson and I drove and rode in more than a few during our tenure at Powerboat.

Yet to those of us who love them, they never get old.

Image of the Week: Giving Thanks On The Intracoastal