From the late Tom Newby to Jay Nichols, top-notch high-performance powerboat photographers have tried to capture the perfect tunnel shot”—an image that gives the viewer a look straight down the tunnel of an onrushing catamaran for years. Done well, photos from that angle of oncoming cats are exhilarating, and even a little scary.

There are two basic ways to capture a tunnel shot. Newby used to attach his camera, with a moderately wide-angle lens and a remote trigger, to a long pole, lower it in front of the moving boat and snap the shot. Of course, the shot also required a helicopter and a pilot skilled enough to put Newby and his camera where they needed to be. And the driver of the catamaran had to hold a constant speed of 60 mph or less. 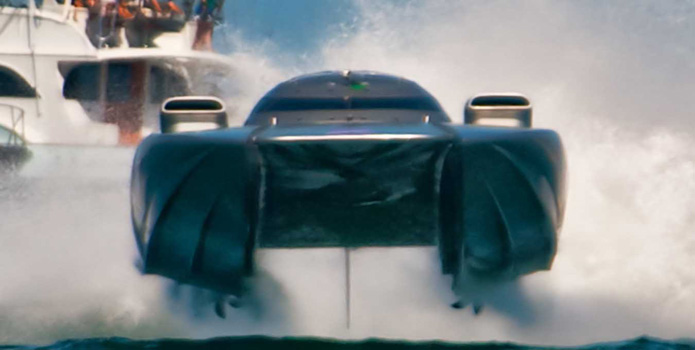 The other way to get a tunnel shot is from the water-level with a long angle lens, and that’s exactly what ace photographer Jay Nichols did here to capture Cintron during last weekend’s Offshore Powerboat Association World Championships in Jupiter, Fla.

The long lens brings both Cintron and the yacht in the background closer to the photographer and one another than they actually are. Nichols was in no immediate danger of getting run down, despite that the photo makes it appear that the big catamaran is almost right on top of him.

Combine the angle, the lens and Nichols’ trademark PhotoShop wizardry and the result is spectacular.

Image Of The Week: Choose Your Castle