After finishing in first place at the Super Boat International New York Super Boat Grand Prix Sept. 9, Richard Chaney and John Arruda brought Richard Roeill, a Nassau County (New York) firefighter who was working that day as a volunteer rescue diver on an SBI safety boat, on board Semper Fi, Chaney’s turbine-powered 48-foot Marine Technology Inc. catamaran. Their goal was to pay tribute to those who lost their lives during the September 11, 2001 horror. An accomplished bagpiper, Roeill was a first-responder at the 9/11 tragedy 11 years ago. 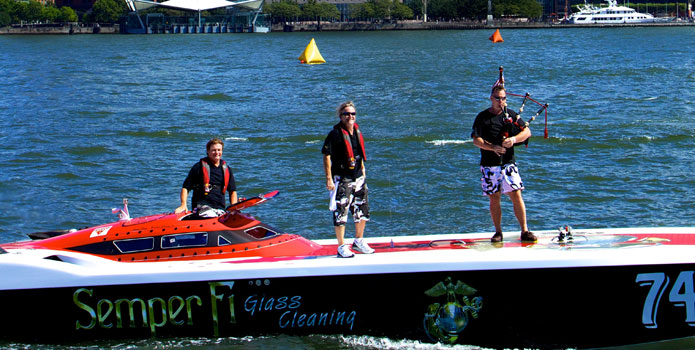 Photographer Tim Sharkey captured the moment. “When I took the photo, I was thinking, ‘What an awesome tribute to 9/11,’” said Sharkey.

With the yet-to-be-finished Freedom Tower in the background, Roeill played on the deck of the 48-footer. The tribute cost Semper Fi its first-place finish, as having the piper on board at the time reportedly violated SBI’s rules.