Your go-to source for performance boating.
HomeSpeed On The WaterImage of the WeekImage of The Week, Part II: Offshore Racing’s Rock Stars

Checking the news feed on my Facebook page last night before I called it quits online, I came across an amazing photo of Johnny Saris holding an electric guitar and looking like something out of a classic issue of Rolling Stone magazine. Johnny, a 20-year-old college student, is driver of the father-and-son offshore racing team called Saris Racing, which won an Offshore Powerboat Association World Championship this year in its class. His father, Jason, an experienced engine builder and offshore racer of note, handles the throttles. 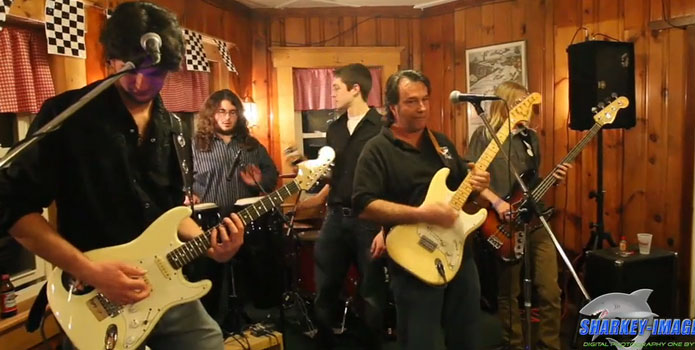 And they both handle electric guitars in Blue Moon, a band they’ve played in together for five years.

After catching Johnny’s photo on Facebook, I contacted photographer Tim Sharkey knowing he would have a photo of the two offshore racers rocking together off the water. Sure enough he did. In the image above, which was taken during the 2013 OPA Awards Banquet at the Oyster Creek Inn in Leeds, N.J., Jason actually is sitting in with Johnny’s band, The Switch.

“It usually works out pretty well,” said Johnny in reference to playing with his 56-year-old father. “But just like when we’re racing, there’s a 25 percent chance it will end in a big argument.”

Image of the Week, Part III: Giving Thanks