We’ve all taken blurry photos. Most times, it happens because we move the camera or because the object we’re trying to shoot moves and the shutter speed of the camera isn’t fast enough to bring it into focus. But whether intended or not, blurring creates the illusion of movement and speed, and speed is something we can’t get enough of in the high-performance powerboat world. 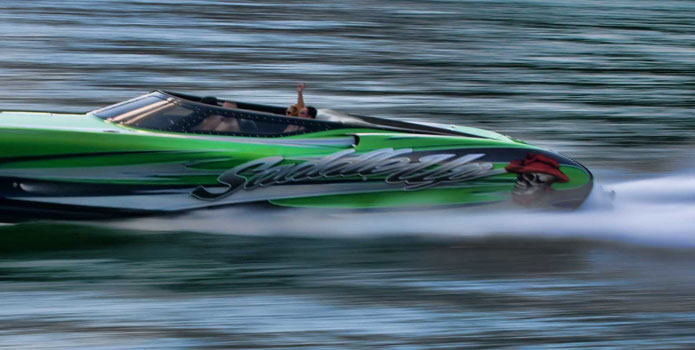 Captured by Jay Nichols of Naples Image, the photograph above is no illusion. This 42-foot Statement called Saddle Up definitely was moving, and moving fast, during the 2012 Lake Cumberland Poker Run. That Nichols chose to crop the nose of the boat makes it that much more interesting, because it forces your eyes to the cockpit, the steely dark water and the white mist kicked up behind the boat.

“This one has a nice flow to it,” says Nichols of the previously unpublished image.

We couldn’t agree more. It has exactly the flow—very fast—we love.