As of right now, there are roughly 130 boats registered for the upcoming Florida Powerboat Club Key West Poker Run, which happens concurrently with the Super Boat International Key West Offshore World Championships, next week. And it’s a safe bet that, as usual, some of the latest and greatest custom go-fast rides will be there. 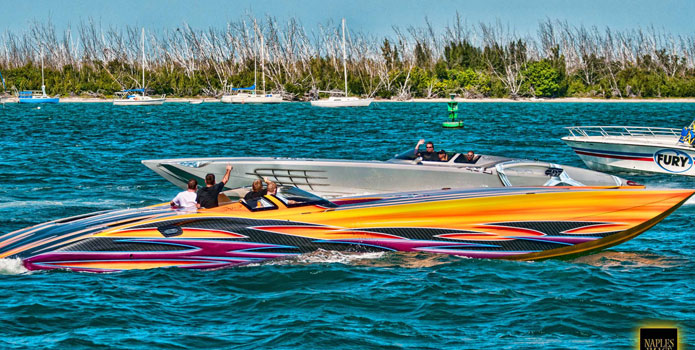 This is the kind of traffic jam we all would welcome. Photo courtesy/copyright Jay Nichols/Naples Image.

In fact, high-end performance pleasure boats are so abundant during the Key West event that you could almost take them for granted—the key word being “almost.” Because whether it’s a seriously well-known catamaran such as the Mercedes Marine Technology, Inc., classic formerly owned by Gino Gargiulo or the lesser-known MTI cat alongside it in this Jay Nichols photograph, the hardware that makes it to the final event of the go-fast boating season is as good as it gets.

Judging from their expressions and gestures, the people in both boats captured in this image, which was taken in 2010, aren’t taking any of it for granted. Nor does Jay Nichols, who’s been shooting the event for years.

“By my fourth trip to Key West for Speed Week, I had figured out that the Pier House on Saturday was a good place to be if you wanted a view of just about everyone who was running a boat,” Nichols said regarding this photo. “Talk about heavy traffic—performance boats everywhere, great light and non-stop photo ops. Key West baby!”