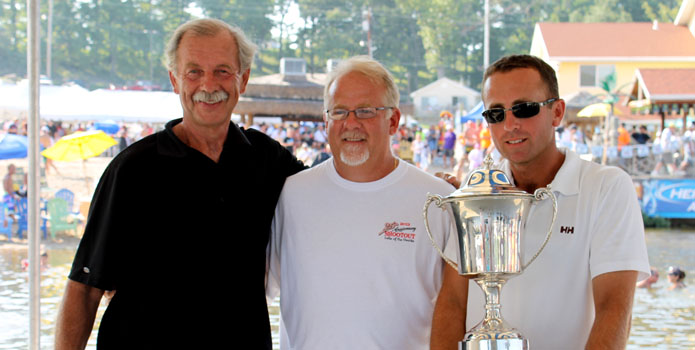 When Bill Tomlinson, owner of the 50-foot Mystic Powerboats catamaran My Way, called Ron Duggan, owner of Captain Ron’s in Sunrise Beach, Mo., last week to inform Duggan that he was indeed planning to bring his turbine-powered catamaran to the Lake of the Ozarks Shootout, the first thing Tomlinson said was, “You did get new radar guns right?”

Referring to his 2011 Top Gun championship where Tomlinson and throttleman Ken Kehoe ran the boat well above the 208-mph top speed the radar guns displayed on multiple runs—according to the boat’s GPS—Tomlinson wanted confirmation that he wouldn’t be wasting his time hauling his boat from Ontario, Canada to the middle of Missouri.

After yesterday’s 224-mph record-breaking run, Tomlinson received that confirmation. As did Ron Duggan, the organizer of the event, and every other participant from Outerlimits owner Mike Fiore, who set a new precedent for V-bottom speeds at the Shootout, and Brad Rowland, who proved that his South Bay pontoon had a couple of extra miles per hour in it with his 114-mph top speed.

After taking this shot from the awards stage in front of Captain Ron’s, we’re not sure who was happier—Tomlinson and Kehoe for their amazing feat or Duggan for the accurate speeds posted throughout the weekend during the 25th anniversary of the event.

Image of the Week: White Lightning at Lake of the Ozarks