During last weekend’s New York City Poker Run, photographer Tim Sharkey made his way down to the docks on the Hudson River where all the boats were tied up. Sharkey captured the action throughout  the day, but he sent this gem to speedonthewater.com moments after he took it. 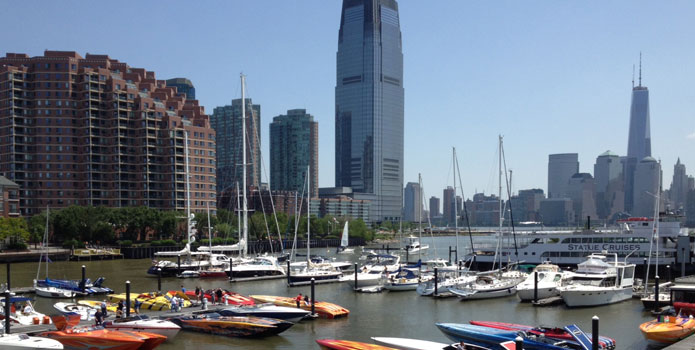 With the Freedom Tower at the far right in the background, the setting for last weekend’s New York City Poker Run was simply spectacular. Photo courtesy/copyright Tim Sharkey/Sharkey Images.

There is a lot to love about this photograph, but what caught our eyes isn’t the flawless blue sky above the Big Apple or the sweet assortment of go-fast boats at the docks on one of busiest and most famous waterways in the world. It’s the Freedom Tower, a monumental reminder of our nation’s courage and will to move forward—and never forget—after one of its darkest days, in the background on the far right side of the image.

It also reminded us of an image taken by the late Tom Newby for Powerboat magazine. In that photo, Newby captured a group of offshore race boats roaring up the Hudson with the Twin Towers of the World Trade Center in the background. Just a couple of years later on Sept. 11, 2001, that background would change forever.

About a month after the September 11 atrocity, Powerboat magazine made Newby’s photo into a limited-edition poster, which quickly sold out. All the proceeds from the poster sales were donated to charities for the families of first responders who perished that day.

Healing seemed impossible, as did rebuilding, that day. As Sharkey’s image proves, for a nation such as ours nothing is impossible. 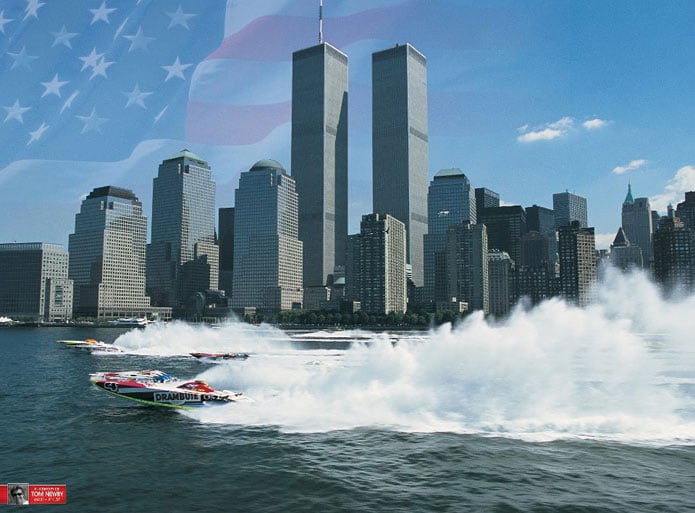 The original Tom Newby poster captured a skyline that changed forever on September 11, 2001.

Editor’s Note: Sharkey Images will offer a poster version of this image in the near future. Speedonthewater.com will provide information on the poster when it becomes available.