Though a lot of folks around the country have been hitting the water every weekend since daylight savings kicked in, Memorial Day Weekend “officially” begins the boating season. But exactly what that means—like powerboats and waterways themselves—ranges from one go-fast boat-loving family to the next. 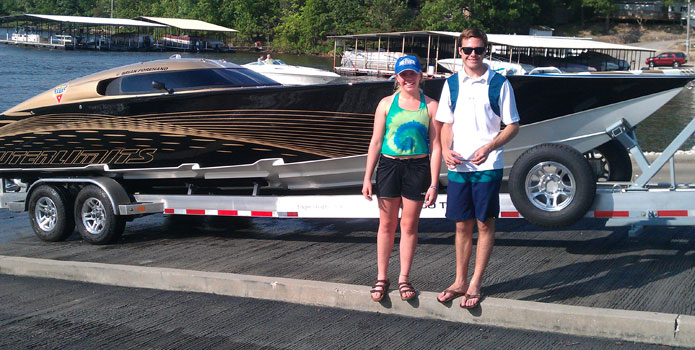 Memorial Day weeked boating for Madisen and Matt Janssen meant Lake of the Ozarks in their father’s 30-foot Outerlimits raceboat.

Take Madisen and Matt Janssen, the 19-year-old daughter and 22-year-old son of Dr. Michael “Doc” Janssen, a world-renowned spinal surgeon and well-known offshore racer. Home for the holiday—Madisen attends the University of Puget Sounds and Matt is a medical student in St. Louis—they did a little a Memorial Day weekend brother-and-sister bonding in their father’s 30-foot carbon fiber Outerlimits SVL raceboat, the boat that won the Superboat International Key West Offshore World Championship in its class last year with Madisen behind the wheel.

“They were out testing the boat in the rough holiday waters all weekend at Lake of the Ozarks (Mo.) all weekend,” said their clearly proud father, who sent this photo to speedonthewater.com this morning.

Janssen’s children had no comment. The expressions on their faces after a few test runs—as you can see from their photo—spoke for them.

From Jason Johnson and I at speedonthewater.com to all of you: May you have a safe and wonderful Memorial Day with the people you love. To those who have given their lives for our precious freedoms and the families that have had to endure such sacrifice and loss, we thank you. We owe you a debt we can never repay, but we will never forget.