Your go-to source for performance boating.
HomeSpeed On The WaterImage of the WeekIOTW: Good Times For A Great Cause

Last weekend’s collective jaunt to the Sarasota (Fla.) Hyatt by members of the Fort Myers Offshore powerboat club proved to be more than just a great time for the folks who showed up in 30-plus performance boats. The charity auction during Saturday night’s dinner raised more than $31,000 for the club’s scholarship fund. 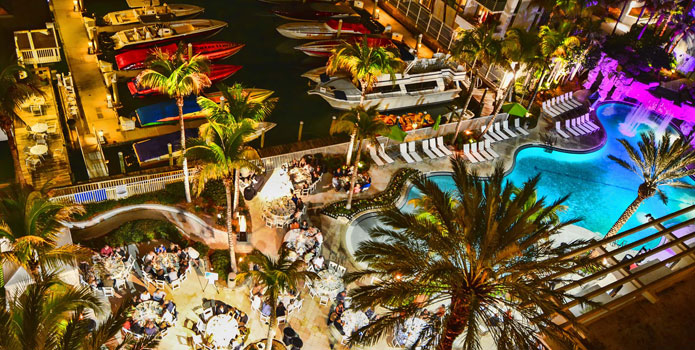 “Thanks to this event and several other fundraising efforts this year, this will be a record year for providing worthy students with scholarships to help start their college educations,” said Eric Belisle, a longtime member of the club.

Fort Myers Offshore staff photographer Jay Nichols, who captured the above image of Saturday night’s festivities at the Sarasota Hyatt, put it more succinctly. “It was a screaming, record-setting success,” he said.

A weather front that passed through the area on Friday was enough to delay the start of the run, but it didn’t dampen anyone’s enthusiasm, Nichols said.

“We didn’t start until noon,” he explained. “It was still raining in and north of Cape Coral, so some members elected to come up later, others jumped in with friends and a few people drove. I went early to shoot the arrival from the Ringling Causeway.

“On Saturday before dinner, we had lunch at the Tarpon Point Grill and were joined by (offshore powerboat racer) Ryan Beckley and some local boaters in the area,” he continued. “During the run, we passed through a fog bank. That was a first for me while shooting.”