Though I’ve never even picked up a camera in a helicopter, I can tell you—after logging many hours with photographers in them—that shooting a poker run is a busy affair. It’s not like shooting an offshore race, where you can catch a boat you missed on the next lap or—clear airspace safely allowing—cut the course and wait for the same boat after it turns. Plus, even the largest offshore race has fewer boats to shoot than a medium-size poker run.

For a photographer shooting a poker run, the opportunities are more limited. That’s especially true when it comes to group running shots.

No one knows this better than photographer Jay Nichols, who was in the air to shoot the Desert Storm Poker Run on Lake Havasu in late April. In the space of a couple of hours on Friday, Nichols shot thousands of frames. The image above is among his favorites—not just for the content, but also for the entire experience of capturing it. 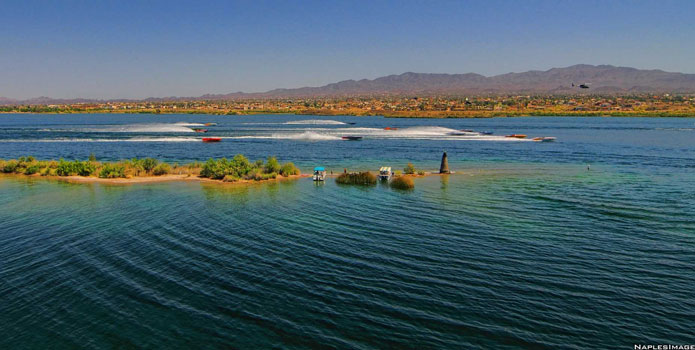 “The river starts a turn to the right, and we were dialed right in to intercept the lead pack,” said Nichols. “The videographer had an equipment failure so he moved into the spotting position and was directing our flight, so I  had the prime shooting real estate in the helicopter.

“For me, there are maybe three or four of these moments each year if I am lucky,” he continued. “Chasing down some of the fastest boats on earth with a bird’s eye view at a big event like this with six helicopters on the pack is like nothing else. The pilots are constantly talking to each other, spotting each and changing positions in a high-speed dance. Thanks to the local knowledge of the pilot—and some bad polarity for the videographer—I got the lucky seat this day.”

Image of the Week: Rumble in the Swamp at the Tickfaw 200

Image of the Week: Left Hanging