As vehicles for action films go, high-performance powerboats are tough to beat. Even Hollywood knows the eye-candy value of go-fast boats—sitting still or running hard—with pretty stars on board. 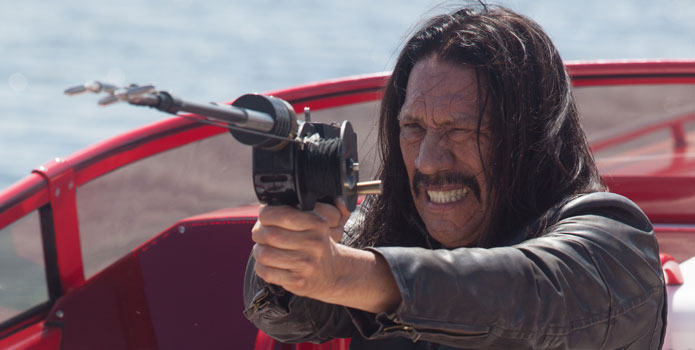 While actor Danny Trejo—think “Dusk to Dawn” and “Heat”— isn’t exactly what most folks would call “pretty,” he is fun to watch in his typical tough-guy roles. His starring role in “Machete Kills,” currently in theatres, has him cast as a government-hired rmercenary recruited “to battle his way through Mexico in order to take down an arms dealer who looks to launch a weapon into space,” according a synopsis of the movie from imdb.com, an online database of information related to films, television programs and video games.

We haven’t seen the movie so we can’t offer a review of our own, but we already know there’s something like about it other than Trejo—a 38′ Lightning from Fountain Powerboats. We’re not sure what’s more badass, the 38-foot Fountain owned by Simon Bradwell or the formidable Trejo.

Call it a draw—and our Image of the Week.