Talking about being in the right place at the right time. A couple of Saturdays back, photographer Jay Nichols found himself in St. Petersburg, Fla., with Todd Werner, Nick Buis and a few of the other folks from Statement Marine who were dialing in the company’s first 50-foot catamaran powered by twin Mercury Racing 1350 engines. The owner of the spectacular boat called Stray Cat (“The paint is so deep and rich it looks like you could almost reach into it,” Nichols said) was on hand for the 50-footer’s first dial-in session, and they used his Statement 368 Crossover SUV center console to catch action from the water. 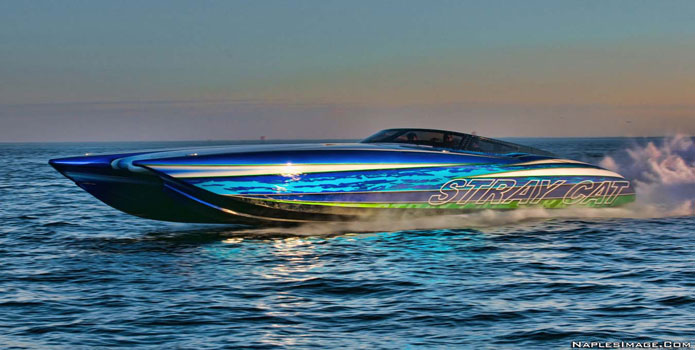 “I spent the day watching the crew put the final touches on the boat, hooking up the dash and console, trim, etc., and set up the 1350s for the shakedown run,” Nichols said. “It was quite an education to watch the process. The paint is so spectacular that it stands out as much as the boat itself. Mark at Visual Imagination outdid himself on this one.”

Right out of the gate, the catamaran made several passes that were reportedly in the 140-mph range—an impressive start for a cat that likely will run much faster once it is completely dialed in with X-dimension, gear and propeller selection. In less than two weeks, it will be on display for the public in the Statement exhibit at the 2013 Miami International Boat Show.

Said Nichols who watched, and photographed, all the run, “It looked great, and it ran like it was on rails.”

To enlarge, click on any of the four images below from Nichols’ photo shoot on Tampa Bay.

Image of the Week: Five Showstoppers

Image of the Week: Something Missing