To say that the production-built high-performance powerboat market “isn’t what it used to be” is kind. As has been well-documented on speedonthewater.com and elsewhere in the boating media, once-dominant builders Baja, Donzi and Fountain have struggled—another charitable understatement—through their own internal financial problems that were compounded by the recession. Word out of the Washington, N.C., headquarters for all three brands is that production is slowly resuming, but the key word is slowly.

Without question, the downturn in the go-fast boat market hit Thunderbird Products/Formula Boats hard as well, and sales of its FAS3Tech series sportboats plummeted. Sun Sport and Super Sport models have carried the Decatur, Ind., production-boat builder through the past five years. But the company remained ready, willing and able to take orders for and produce its FAS3Tech models. And according Formula chief executive officer Scott Porter, orders for FAS3Tech offerings picked up significantly this spring. 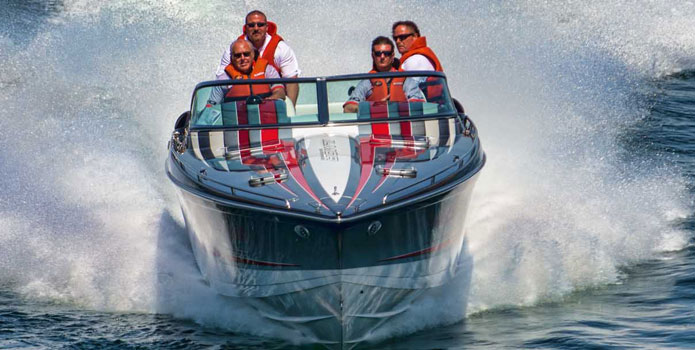 Even in a fleet that included some of the most exotic go-fast boats in the world, the Ilmor-powered Formula 353 FAS3Tech stood out. Photo courtesy/copyright Jay Nichols/Naples Image.

To help keep their FAS3Tech line visible during such challenging times, the folks at Formula partnered with the people at Ilmor Marine to install the first production pair of Ilmor MV8 570 engines in a 353 FAS3Tech. The 35-footer with the Ilmor twins debuted at the 2013 Miami International Boat Show in February. All dialed in—the boat now tops out at 85 mph—the 353 was on the water again for the public to see two months later during the Desert Storm event in Lake Havasu City, Ariz.

That’s where photographer Jay Nichols captured this image. And in a sea of high-end custom creations, this classic 35-foot-long sportboat with latest Ilmor power stood out beautifully.

Editor’s Note: Look for a first person, hands-on review of the Ilmor-powered Formula 353 FAS3Tech by speedonthewater.com co-editor Jason Johnson to go live on the home page of offshoreonly.com on Thursday, June 13.