Close racing is good racing, and offshore powerboat racing is no exception. Except in offshore racing, rubbing definitely isn’t racing. Fiberglass-to-fiberglass contact in machines that weigh tons and run more than 100 mph in ever-changing water is a recipe for disaster.

So how close is too close? Simple—too close means contact. The rest is just, well, close. 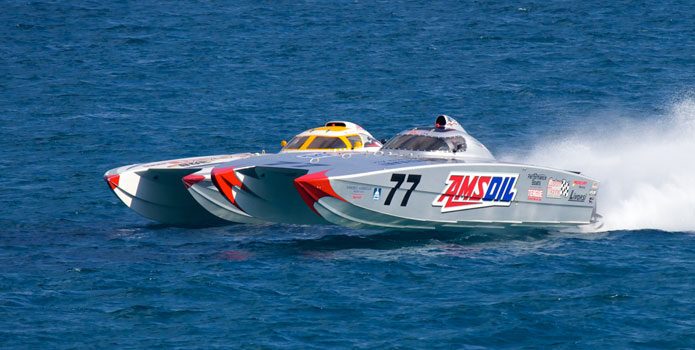 This image by sharpshooting photographer Tim Sharkey from the Offshore Powerboat Association World Championships last weekend in Jupiter, Fla., of the Super Cat Light class battle between Amsoil and Phoenixparts.com shows just how close that close can be. It’s hard to know where one Skater catamaran starts and the other ends.

From Sharkey’s angle with the silver boat in the foreground it looks like Amsoil—the high-performance synthetic lubricant company was title sponsor for the 2012 OPA Offshore Powerboat Series—has a sponson tip on Phoenixparts.com. Or does it? Either way, this spectacular image defines deck-to-deck racing.

Editor’s Note: Image of the Week, Part II: Down the Tunnel in Jupiter, will go live on Friday, October 25.