In the various hey-days of offshore racing, it wasn’t uncommon, between rescue and media helicopters, to have as many as eight
“birds” in the air. Pre-race pilot meetings were—and still are—every bit as important as drivers meetings. Even as a journalist covering a race from a helicopter, my top priority wasn’t watching the action below. It was helping the pilot watch out for other helicopters. 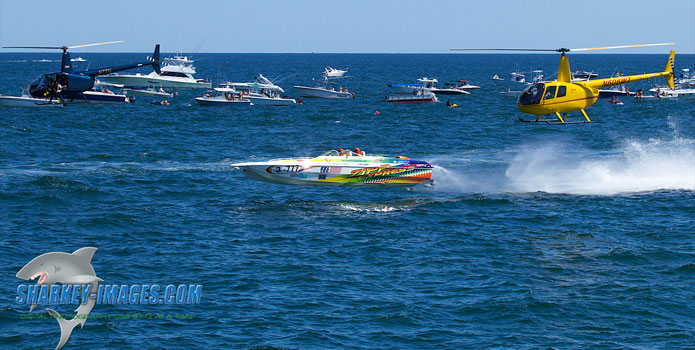 Today’s smaller offshore racing fleets mean fewer helicopters above them, but that doesn’t mean they’re not still up there, as this Tim Sharkey photo from the 2012 Offshore Powerboat Association World Championships in Jupiter, Fla., proves. Sharkey captured this image of the Zip Express raceboat framed by two low-flying Robinson helicopters from the upper deck of a nearby yacht.

“I thought the chance of nailing this shot was slim to none, but it all fell right into place,” said Sharkey. “I was at the same altitude as the two choppers and caught a prop shot of Zip Express dead center of the two of them.”

Worth noting: Even though the boat doesn’t have as much air as the helicopters, it’s still flying.