Even the debut of the Miss GEICO boat with the new Mercury Racing 1650 Race engines wasn’t enough to take the spotlight off of the new Superboat class at the fourth annual Super Boat International (SBI) Space Coast Super Boat Grand Prix in Cocoa Beach, Fla.

With Billy Mauff and Jay Muller leading the way in WHM Motorsports, the six-boat class featured some competitive racing in some rough conditions. FreezeFrameVideo’s Jeff Girardi captured Mauff’s 40-foot Skater in flight as it powered its way along the 5.4-mile course in front of thousands of spectators. The victory gave Mauff his third-straight checkered flag in Cocoa Beach. 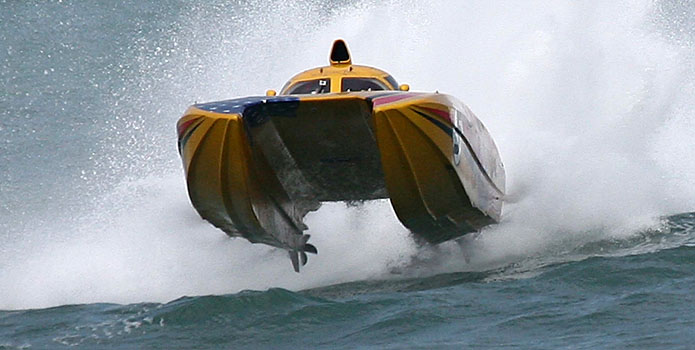 In the competitive Superboat class, which features engines with 750 horsepower, Billy Mauff and Jay Muller drove WHM Motorsports to a victory in Cocoa Beach, Fla. Photo by Jeff Girardi/FreezeFrameVideo.net

Mauff and Muller were by pressured by Tony Marcantonio and Mark Kowalski in Marcantonio’s 38-foot Skater JD Byrider, but they managed to win the 88-mile race by nearly 30 seconds. JD Byrider took second ahead of Team STIHL, which won the season opener in Biloxi, and Team CRC. The new Spirit of Qatar boat finished fifth in its debut ahead of Warpaint.

“On a scale of 1 to 10, the conditions today were a 12—but it was the right water for my boat,” Mauff said after last weekend’s race. “We’ve got a fabulous class in Superboat. It’s not so much about my win today as it is about the whole year and all the drama there is going to be. No one team is going to win every race. Today was a WHM day, but it may not be in Orange Beach.”

Image of the Week: Left Hanging